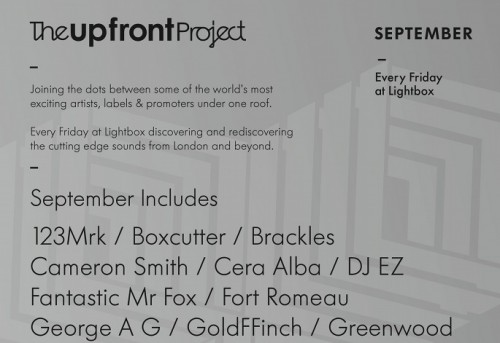 The Upfront Project takes place every Friday at Vauxhall’s Lightbox, inviting some of the hottest names from across the spectrum electronic music down to flex their performative muscles.

The series, which launched on July 27, looks set to power through September showcasing a broad swathe of dancefloor fare from luscious house and techno through to no-nonsense garage and grime.

On September 7, Apogee will invite a host of house operators down to perform, including 2020 Vision’s Simon Baker, an exclusive five hour set from young Parisian Le Loup, and appearances from Cera Alba and The Pushamann.

The following Friday, September 14, will see an array of dancefloor experimenters take to the booth. Heading the charge will be Teutonic techno innovator and Fachwerk boss Mike Dehnert, alongside a special guest headliner whose name is yet to be revealed. In support will be Workshop boss Lowtec, sometime Numbers affiliate GoldFFinch, Planet Mu stalwart Boxcutter, South London Ordnance, Morris Cowan and more.

September 21 will show the series’ ruder side with a populous cast of grime, garage and UK funky figureheads including DJ EZ, MJ Cole, Lil Silva, Brackles and Slimzee playing back to back with Wonder.

Finally, the series will see out the month on September 28 with a range of envelope-pushing, eardrum massaging sounds. Filling the headline slot will be the inimitable Photek, with support from Fantastic Mr Fox, Paul White, Pusherman, Fort Romeau, Kelpe and more.

Further info and tickets for all Upfront Project events, in September and beyond, can be found at their website. You can watch a promo video for the series below.