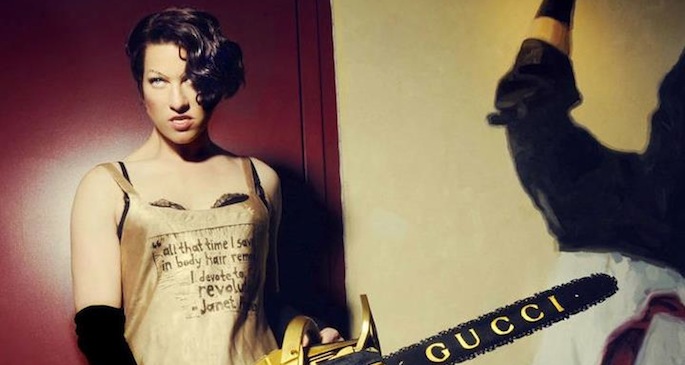 Further update: The Daily Swarm report that Albini has responded in turn. saying “sorry” for calling Palmer an “idiot”. As ever, though, his blog post is far from grovelling: he maintains that that “having gotten over a million dollars from such an effort that it is just plain rude to ask for further indulgences from your audience”. As with both statements described  below, it’s best read in full.

Update: Palmer has now fired off a response to the criticism on her blog. The lengthy post is addressed to Amy Vaillancourt-Sals, the musician whose disgruntled letter to the singer  got the whole debate moving in the first place. Palmer outlines her own long history of playing gigs for free, makes the good point that many of the artists featured were friends and associates moonlighting from other successful bands, and stresses that she regularly sells her music online at minimal or no cost. A particularly pertinent extract, seemingly aimed at Albini, reads:

YOU HAVE TO LET ARTISTS MAKE THEIR OWN DECISIONS ABOUT HOW THEY SHARE THEIR TALENT AND TIME.

especially in this day and age, it’s becoming more and more essential that artists allow each other space to figure out their own systems.

the minute YOU make black and white rules about how other artists should value their own art and time, you disempower them.

anyone is allowed to crowdfund a record. and anyone is allowed to crowdsource a musician. or a pair of socks. or a place to crash. or a meal. anyone. the band at the local pub can do it, i can do it, tom waits can do it, and justin bieber can do it (his fans would FLIP to be up on that stage making music with him. i’m imagining a crowdsourced belieber playing violin on “boyfriend” right now and loving the image, truly. it’s also fun to think of tom waits wearing fan-knit-socks.)

i could ramble on about my million-dollar Kickstarter and where that million dollars actually went (actually, i already did that, in a blog over here)…and i could tell you that i wish i had enough money to hire a second tour bus and put eight full-time musicians on salaries. but the funny thing is: i actually don’t. i don’t wish that. not right now.

because this isn’t about money. for me, this is about freedom. and about choices.

Elsewhere, one of the volunteer musicians in question has taken to the web to explain why she was happy to perform for free.  Erica Mulkey (who also moonlights as Unwoman) has written an article for SFWeekly explaining the case. The cogent piece talks about how “overjoyed” she was to play with a hero, and that it ultimately “feels really good to give”. Again, interested parties should definitely check out the piece. [via Prefix]

On her latest tour, the punk cabaret artist is using fans as backup musicians, but not everyone is pleased.

Touring in support of the just-released Theatre Is Evil, Amanda Palmer and the Grand Theft Orchestra are utilizing fans who play strings, saxophone and brass, but with only beer, merchandise, and the experience as compensation.

Instead of an outpour of fan support, Palmer’s blog post has been flooded with comments from professional, touring musicians who are enraged that she isn’t paying the backup artists.

In an interview with The New York Times, Palmer rejected the criticism. “If you could see the enthusiasm of these people, the argument would become invalid,” she said. “They’re all incredibly happy to be here… they fundamentally believe it’s worth their time and energy to show up at this gig.” Palmer is paying the three members of the Grand Theft Orchestra, but says it would cost $35,000 to pay the additional musicians over the 30-odd date world tour.

Compounding the criticism is the $1.2 million Kickstarter campaign that paid for the production of Theatre Is Evil. In a separate blog post, Palmer estimated how the money would be spent, and documented a scenario where she would break even, despite raising over a million dollars from fans. Palmer believes some of the outcry is coming from the same people who demonized her fan-driven fundraising.

Misanthropic superproducer Steve Albini weighed in on his online forum, saying there is “a threshold for how much to indulge an idiot who doesn’t know how to conduct herself.” His full statement is below, and as always, it’s worth a read.

If your position is that you aren’t able to figure out how to do that, that you are forced by your ignorance into pleading for donations and charity work, you are then publicly admitting you are an idiot, and demonstrably not as good at your profession as Jandek, Moondog, GG Allin, every band ever to go on tour without a slush fund or the kids who play on buckets downtown.

Pretty much everybody on earth has a threshold for how much to indulge an idiot who doesn’t know how to conduct herself, and I think Ms Palmer has found her audience’s threshold.