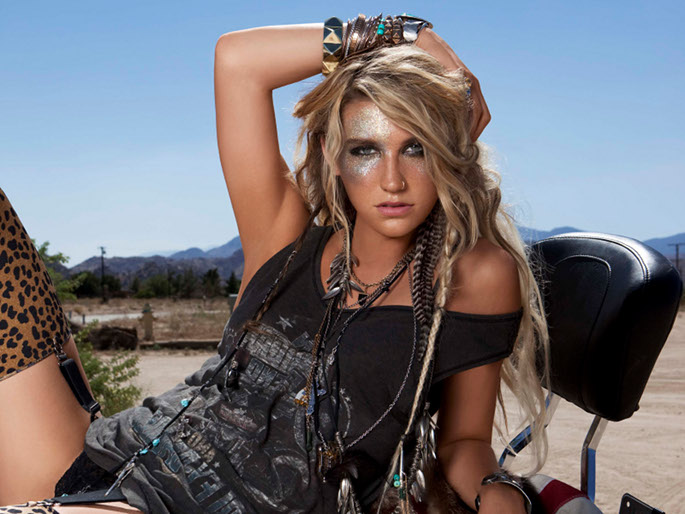 Ke$ha, as the music blogger Jonathan Bogart put it in his excellent essay on ”The Ke$ha Project”, trades on being “intentionally, gloriously vulgar“.

After the colossal success of 2009’s ‘Tik Tok’, the snotty Nashville native has gone on to become one of the global pop machine’s most successful – and most contentious – products. As Exclaim note, she’s now enlisted an eyebrow-raising list of new recruits to her trashy party-all-day-party-all-night worldview.

Ke$ha’s new album Warrior will feature guest appearances from both chief Flaming Lip Wayne Coyne and garage rock legend Iggy Pop. The zany list of collaborators goes on: Willi.i.am, Black Keys drummer Patrick Carney, and Ben Folds(!) have all been involved with the project. Among the regular guns-for-hire include regular collaborator Dr. Luke and peripatetic songwriter Greg Kurstin (of The Bird And The Bee).

Ke$ha sounds enthused about the collaborations: “I’ve been working for a year on this new record and have collaborated with some of my idols. This process has been long and intense and I couldn’t be more stoked to share this music. I hope with Warrior my fans get to know me in a much more raw and vulnerable way:.

Coyne owes Ke$ha a favour; along with Nick Cave, Prefuse 73 and Erykah Badu, she donated her blood to be used in the production of Coyne’s limited edition “blood vinyl” earlier this year.

Warrior will arrive on September 25. The tracklisting is below.