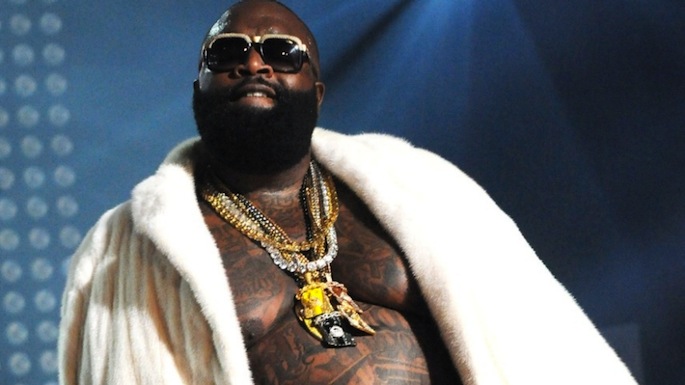 This Saturday’s taping of the BET Hip-Hop Awards resembled The Source Awards of yore.

Taped this Saturday in Atlanta, reports are still filtering out about what exactly happened at BET’s annual celebration of hip-hop. Here’s a rundown of the various incidents.

Billboard provides the video of a brawl involving Rick Ross and Young Jeezy, former collaborators who have been feuding for several years now. A shirtless (obviously) Ross yells at Jeezy and company before security intervenes. The respective entourages continued the conflict in the parking lot, causing security to halt the show and lock down the facility. TMZ has video of the initial conflict, below.

In addition, Maybach Music Group’s resident nutcase Gunplay reported a subsequent tussle with 50 Cent and his G-Unit crew to New York’s Power 105.1. Repeatedly referring to Fifty and associates as “donkeys,” Gunplay says he was pepper sprayed and accuses the rapper of using police as protection (via FADER):

“I was getting ready to go catch my ride. Police told me I couldn’t leave the trailers. I turn around and I see the donkey with eight more donkeys and it was either me jump the barrier and run, or stand, pull up my pants and knuckle it out with the donkeys. So he walks up to me with about eight donkeys, and he nodded to one of the donkeys and one of the donkeys set it off and we rumbled. I stood up in the paint like a real G supposed to, with five body guards that are trained to kill a human with one finger. I lost my footing, I got right back up, rumbling, rumbling. And then the pepper spray came. I don’t know [who pepper sprayed me]. They all cops, so who knows. The undercover or the plain clothes, they all running with 50 so you never know which one was what. Man got security with him.”

Gunplay ended on an threatening note: “If that would have been Miami, everybody would have been laid out.” WorldStarHiphop has video of this melee, which reportedly shows Gunplay laying out a member of G-Unit (also below).

In a lone beat of positive news, rap legend Q-Tip hinted at a follow-up to G.O.O.D. Music’s blockbuster compilation Cruel Summer, on which he did not appear. Speaking with MTV, Tip said that “I have to let the cat out of the bag. Kanye’s probably gonna get…” he trailed off, calling over fellow G.O.O.D. Music member Pusha-T “If there’s a Cruel Summer, then there’s got to be a Cruel Winter, right?” From Pusha’s reaction, this might be a slight upgrade from “rumor.” That video is below as well.