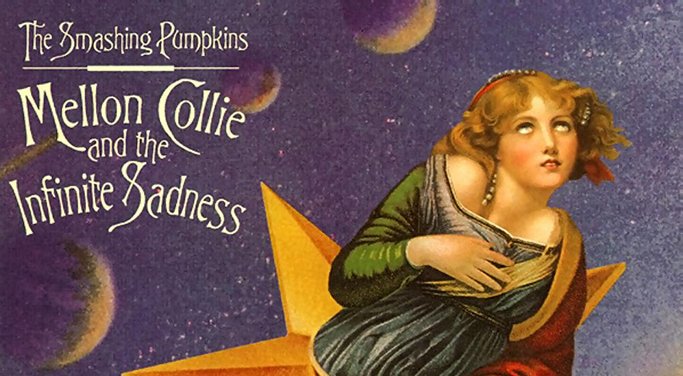 Mellon Collie And The Infinite Sadness, Smashing Pumpkins’ sprawling 1995 opus, is to get a suitably Brobdingnagian reissue.

The album has gone down in legend as one of the Nineties’ greatest examples of alt.rock largesse. Running to 28 tracks and 128 minutes, Mellon Collie And The Infinite Sadness is a snapshot – well, a diorama – of  the band at their critical zenith and commercial peak. As Exclaim report, the album is about to be resuscitated for a new generation.

The information comes from a listing on Amazon, snouted out by Antiquiet. The remastered album will arrive in various different packages, with the most hefty of the bunch being a five disc CD/ DVD box set. The set will feature jazzy new cover art, two books of expanded liner notes, a plush velvety disc holder, and – best of all – a Decoupage kit to allow you to make your own bespoke album cover. It’s not short on musical goodies, either: the collection includes 64 bonus tracks of unreleased and alternate material from the period, and video footage of a 1996 live show filmed at Brixton Academy.

Mellon Collie And The Infinite Sadness will also be available as a four LP vinyl box-set, a 2xCD edition and a deluxe download. The album has been “painstakingly” remastered by Bob Ludwig from the original master tapes.

The new edition is the latest in a string of Smashing Pumpkins reissues. Last year saw remastered versions of Gish and Siamese Dream, and this year saw Pisces Iscariot get a second lease of life. The current iteration of the band recently released new album Oceania. Prime Pumpkin Corgan, meanwhile, has been busy jamming the boot into Pavement and Radiohead.