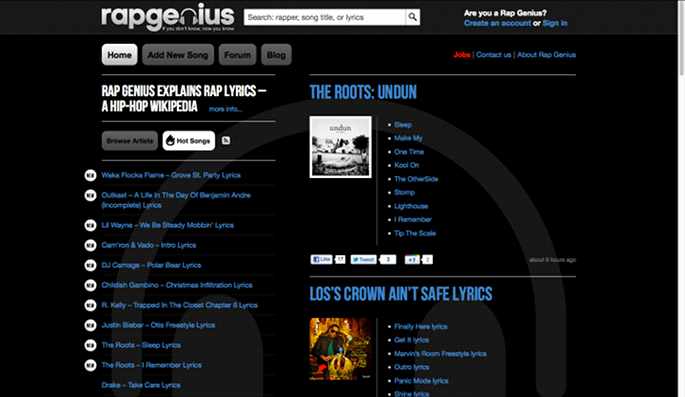 Rap Genius, hip-hop’s equivalent to the Babel fish*, looks like it may be expanding beyond all recognition.

Port in a storm for the cloth-eared rap aficionado**, Rap Genius hosts tens of thousands of annotated versions of rap lyrics. Taking the rap track most recently posted on this site – Maybach Music Group’s ‘Bury Me A G’ – we now know that T.I obliquely references a 2007 weapons bust, slings a coded reference to deceased pal Philant Johnson and “can kill you with any weapon that exists” (there’s also a picture of Rick Ross’ Mum to accompany the “nigga look out for momma” line). A rich resource, then.

The Fader report that major changes are afoot for Rap Genius. Venture Capital Firm Andreessen Horowitz have ploughed $15m into the company in the hope of expanding the business substantially. The crowd-sourced site is, according to a blog post by partner Marc Andreessen***, “the definitive online community of rap aficionados; one of the fastest growing web sites in Y Combinator’s history; a thriving ecosystem of ideas, artists, and fans”.

Andreessen – co-founder of Netscape, and a highly-regarded technology entrepreneur – suggests that the major cash injection will provide the backbone for a major expansion out of the world of rap hermeneutics. His plan is to use the site’s model to “annotate the world”: “Poetry, literature, the Bible, political speeches, legal texts, science papers. And those are just the start. We think the community will continue to expand beyond rap into all culture. The potential of this company is large…Only a handful of people know that the big missing feature from the web browser – the feature that was supposed to be in from the start but didn’t make it – is the ability to annotate any page on the Internet with commentary and additional information”.

** = a synonym for ‘fan’. Normally used as a glib affectation.