Check out Yuri Suzuki’s Sound of the Earth, a one-off spherical vinyl record

The Sound of the Earth is a new vinyl record by Yuri Suzuki. The one difference? It’s spherical.

The East London-based designer’s globe-shaped new album arrives clamped in a metal vice, and three years in the making. As The Guardian report, Suzuki has spent that time “developing software that allows him to map the sounds on to the [globe’s] 3D surface, and recently devised a spherical track cutting machine with the help of engineers in Tokyo.”

“It is played by a stylus that runs longitudinally down the side of the globe, tracking a continuous groove that spirals around the circumference from pole to pole. On its journey, as it scans across the continents subtly inscribed on the black surface, it plays a surreal mashup of field recordings taken by Suzuki on his travels, along with fragments of national anthems and folk music.”

Suzuki has been pushing his unique approach to the physical medium for a while now: a trawl through his website reveals unique pieces such as Tube Map Radio, and this hands-on take on synthesis.

To check out The Sound of the Earth in action, watch the video below, by Alice Masters. On a slightly less grand note (but still a pretty neat one), the Left_Blank label recently released a vinyl record in postcard form. You can check that out here. 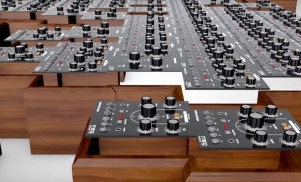