“Anyone who sends us music is in with a shot”: an update from Butterz on yesterday’s changes to the label 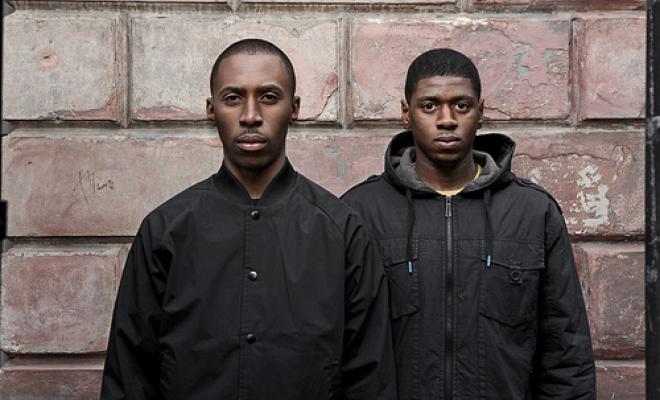 Yesterday, we reported on a change in the personnel in charge of leading grime label Butterz.

The label was founded in 2010, launching with Terror Danjah’s ‘Bipolar’. Since then it’s housed releases from Royal-T, Swindle, S-X, Champion and more, with DJ duo and label founders Elijah and Skilliam [above] at the helm. However, a post on the Butterz Facebook page revealed that the label is now a six-person operation, with Elijah and Skilliam, artists Terror Danjah, Royal-T and Swindle, and Dane Bradshaw from London-based promotions company Two Plates in charge of operations.

Eager to find out how this happened, and how it would affect the future of the label, FACT caught up with a currently Paris-based Elijah yesterday evening.

Butterz’ 2012 was a slower year, in terms of releases, than 2011. Was that a deliberate thing, wanting to slow the schedule down, or was it because you had to focus on the club nights?

“For us, six records a year is perfect, that’s what we did in 2011 and they all hit the spot. I never really thought of having a schedule it’s more a release when the music and time is right. Getting the club side of things right has been a big deal for us as it wasn’t so long ago that you couldn’t hear grime in the clubs at all.”

Tell us about the decision to expand the team behind the label to six people.

“We are still rolling with the people that motivated us to start the label in the first place, I’m really happy about that and seeing the success of Royal-T on Rinse, Terror on Hyperdub and Swindle on Deep Medi just shows we were right about these guys. Now Swindle & Royal-T have their own shows on Rinse FM I thought it would be good to be even more open and take on some of the records they are pushing on their shows too, there isn’t as much crossover in our selections as there was last year, but we are still unified by the same vibe.

“It’s the best gesture of thanks Skilliam and I could give for helping us build up the label and the club nights.”

“Me personally too, I needed help on running things as I’ve been really busy with other projects that make it difficult to connect with people the same way which I did when I was in London all the time – I’m stealing wifi in Paris at the moment. Dane has always helped us out with bits unofficially I thought again it was time to recognise the legwork he has put in and push the label forward. Before I did most myself and it just meant things are getting done slower than necessary. I’ve known him since I was 4 so can trust him with everything.”

Was it a decision you toiled over quite a lot?

“Not at all. It just fits the ethos of the label. When we first started I wasn’t trying to make anyone exclusive or tie these guys up in ridiculous contracts. That isn’t going to change now either. They have done releases with other people but are still representing and we just respect the loyalty. Not a lot of people are like that in music, it’s just get what you need from people then bounce. We all talk every day. I wake up to missed calls from Terror and Swindle all the time as they always want me to listen to something. It’s a very ‘music business’ way to operate but this ain’t what it’s about.”

Do you think having more people behind the label will mean it releases more – because there’s more people pitching – or less – because you’ve all got to agree on stuff, etc?

“Definitely more music next year then this year, I don’t think we would all have to agree on something to go forward with it, but I know with certain records you could tell this is out of the Elijah & Skilliam record bag, or out of Royal-Ts or Swindle’s. Just embracing the diversity. If we did this last year I can think of a couple of big records we would have probably landed that we missed out on. I don’t have regrets but you know when you see a tune you rate put out in a lazy fashion I just want to cry on the music’s behalf!”

“When you see a tune you rate put out in a lazy fashion I just want to cry on the music’s behalf!”

What else do you have in the pipeline for the label – releases, raves, etc?

“Right now we have our big party at Cable on November 10 with P Money, DJ EZ, The Heatwave and more, so the focus is on making sure that is a big one. It’s all been part of our first label tour, all the dates so far have gone really well. We will put out like an online equivalent of a tape pack at the end of November so people that miss out can hear what’s up at these parties.

“I’ve been making some bits as well. Something I’ve not really wanted to get my head into before but I had the urge after spending nearly six weeks away from home recently… Releasing something on Butterz in some way shape or form I guess is a long term aim.

“Hopefully some more garms with Mishka too we running out of our collaboration and I’ve really enjoyed working with them. They have been really supportive of our music and were really welcoming when I spent some time out in New York earlier this year. Big up Michael all day.

“We have been working on a visual project too… Kind of difficult to explain, but it will be with you at the top of 2013. We’ve been active its just not really reflective in the discography!”

You’ve said before that you always want to release new people on Butterz, even though there’s an obvious core family there. Who can you see releases coming from in the future?

“I’m still buzzing that we have the opportunity alone, that’s what people don’t understand. With most of the records I’ve been there from the first sounds in Fruity to playing demos on Rinse to test presses to making artwork and everything. I really love the process. There’s a bunch of guys we are playing at the moment which could become future black and yellow: Preditah, Arkane Soul, Baxta, Deeco, P Jam, Mr Mitch, Shiftee, Flava D, DJ Q… Basically anyone who sends us music is in with a shot, now we on prime time 7-9 on Rinse FM the music is getting better exposure than ever before. I’m still listening to loads of tracks a month from unknowns from all over the world. If butterz isn’t going to continue putting out new people we might as well stop now.

“At the same time the old skool grime head in me wants a D Double E and JME release on Butterz. We will see. Usually when I say it in public it falls together in the end. Worked with P Money and Trim!”