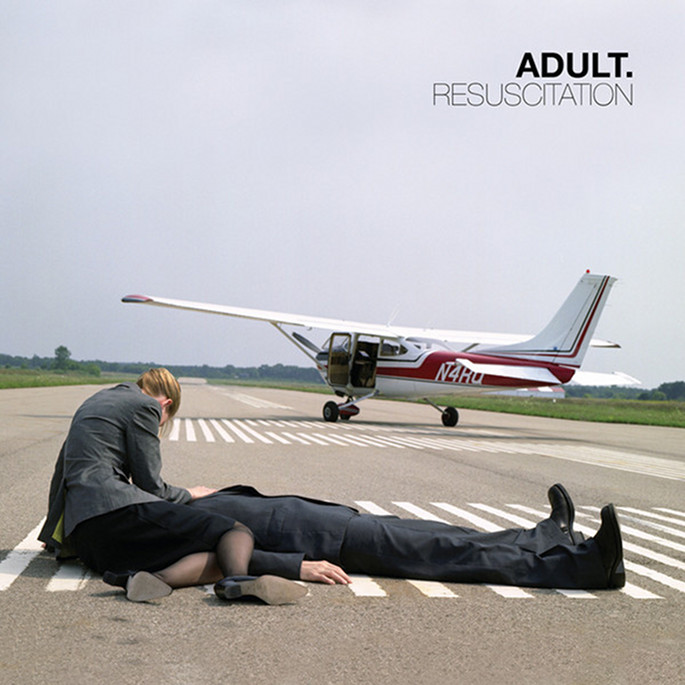 After something of a pause, Detroit electro weirdos ADULT. are reactivating.

When ADULT. emerged in 1998 with the Dispassionate Furniture EP, they initially came over as po-faced no-wave revivalists. Further releases, however, showed them to be fairly singular operators, producing futureshocked electro with retro touches: 2000’s ‘Hand To Phone’ made an appearance on the wildly successful As Heard On Radio Soulwax Pt. II, and 2003’s kohl-eyed Anxiety Always LP proved a particularly satisfying collection. Two more LPs – 2005’s Gimme Trouble and 2007’s Why Bother? – followed, with 2008’s Let’s Feel Bad Together EP serving as their last recorded statement. In the intervening years, the pair have diverted their energies elsewhere, working on a horror film triptych called Three Grace(s).

Ghostly International are now set to reissue the band’s overlooked debut LP, Resuscitation. Originally released in 2001, the disc collects newly restored and recorded versions of their earlier singles. It’s not a surprise the record doesn’t get cited much anymore: Resuscitation has been long out of print and has never been given a digital release. Ghostly will rectify that with a 2xLP and digital reissue – both of which come bundled with four digital bonus tracks recorded around the same period.

As a supplementary sweetener, ADULT. are also set to release a 7″ of previously unheard cover versions. Perhaps the more interesting of the two is a version of ‘122 Hours Of Fear’, originally performed by elusive 1970s synth legends The Screamers. ADULT. describe the outfit as a “major influence”, and have previously snuck the track into their live sets. The other track is a rework of A Number Of Names’ brilliant 1981 proto-Techno cut ‘Shari Vari’, a track the pair have previously remixed.

FACT have an exclusive stream of the covers disc below for your delectation. Similarly, Resuscitation track ‘Minors At Nite (Still Suck)’ is also available to enjoy. The 7″ is due on November 6, with Resuscitation to follow on November 27; both can be picked up at the Ghostly store. New material is also promised for 2013.