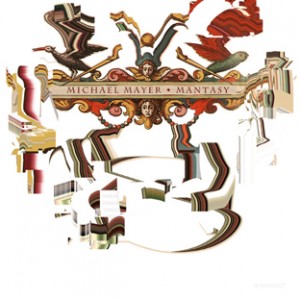 It’s now around a decade since Michael Mayer‘s Cologne-based label Kompakt rose to prominence as the “it” label among the dance cognoscenti, and eight years since Mayer’s debut solo album, the sleek Touch. The inexorably turning wheel of transient dance trends may mean the imprint is less fêted these days, but that’s not necessarily an indictment of its output – and lately, it’s been restaking its claim to relevance. Recent singles from Kolombo and Auntie Flo swish across the dancefloor, propelled by effortlessly gorgeous melodies, like erstwhile club queens reclaiming her crowns – and now the boss himself has made one of 2012’s most distinctive albums.

Mantasy is a noticeably self-contained work: it unfolds gradually and deliberately, full of wholly beguiling details. The mood is romantic – one would expect nothing less from well-renowned softie Mayer – but there’s a sinister undercurrent throughout as well, rather than the wistful melancholy that used to be Kompakt’s stock-in-trade. Chunky beats are wreathed in thick fogs of synths: the sense of mystique permeating Mantasy brings to mind a techno version of a Brothers Grimm fairytale. The combination of a childlike vocal loop and an insistent, obsessive melodic loop on highlight ‘Roses’ is at once chilling and overwhelmingly lovely. The strange, pastoral mood also takes root in ‘Lamusetwa’: midway through the track comes down to earth with a judiciously timed melodic descent, before lifting off again with a synth rush like a swarm of birds taking flight and returning to its odd, springy oscillations. Later, actual birdsong is combined with a harp on ‘Baumhaus’, a gentle and elongated exhalation.

Not that Mayer is entirely lost in the forest: cuts such as ‘Rudi Was A Punk’, ‘Neue Furche’ and the title track find him striding out with martial rigour armed with unstoppable basslines and Depeche Mode homages. Any qualms about their derivative nature are overridden completely by Mayer’s sense of playfulness – and the way in which nothing is ever quite as simple as it appears on Mantasy. Cuts that start off in one place are liable to end up in another as odd little melodies and sounds enter, linger for a few seconds, and disappear again. The mechanical chug of ‘Rudi Was A Punk’ culminates in a metallic breakdown and marimbas; the looping riff that worms its way into ‘Neue Furche’ is an unexpected delight. Mayer concludes Mantasy with the very in-character positivity of ‘Good Times’: unashamedly corny, but this hug in aural form is the note you always knew he’d end on. In a way, it’s Mayer’s form of a victory lap – and it’s more than deserved.