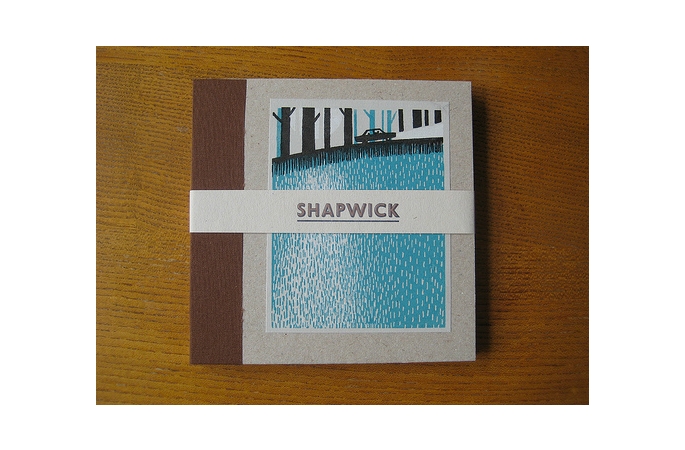 FACT favourite Jon Brooks has a new album on the way.

Shapwick was originally released on CD by Clay Pipe earlier this year, in a limited edition of 110 copies (pictured above). It sold out within a couple of hours, and so Clay Pipe – the label conceived and curated by supremely gifted illustrator and musician Frances Castle – have decided to give it a new life on vinyl. The LP, an edition of 500 with new artwork, will be available in January 2013; each copy will come with a download code.

Jon Brooks is probably best known for his work as The Advisory Circle on Ghost Box, which includes 2008’s chilling Other Channels (for our money one of the ‘Box’s very best offerings to date) and this year’s pastoral prog pastiche As The Crow Flies. In addition to that project, he composes  for film and TV, masters most of the stuff that comes out of the Ghost Box universe, and operates the Café Kaput label, through which he releases CD-Rs of mostly his own work. One such disc, Music For Thomas Carnacki, ranked highly in FACT’s albums of 2011 list, and deservedly so.

Like all releases on Clay Pipe, Shapwick is a record strongly rooted in the English landscape. Brooks explains its genesis in the accompanying notes:

I had been stuck in a five hour long traffic jam on a motorway in the autumn of 2011. At the end of the ordeal, we left the motorway and noticed the traffic was backing up onto local records near Glastonbury; streams of cars, full of hot-headed motorists crawling along congested highways, the roads groaning under a volume for which they were not designed.

I searched the map for alternative routes. We had several hours of further driving ahead of us and it was already dark. One such route was through an area close to Shapwick, a small rural village. As we joined the approach to the village, we headed through several miles of unlit roads, with nothing but gnarled trees and woodland either side, the card headlights suggesting the twists and turns ahead.

I felt a certain energy around the place. The images created by the trees in the dark conjured inspiration and it struck me that an album could be based on an imaginary impression of this area. I had already recorded some pieces that were in search of a home and the idea formed within seconds.

The music I had been writing was recorded directly to a four-track cassette recorder. There were some piano recordings that I had made at my uncle and aunt’s house in Devon (where I had stayed prior to the traffic jam), along with other acoustic and electronic pieces. With the Shapwick framework in mind, I recorded much more material. Using everything from a song harp in a garden, to a modular analogue synthesizer, I set about creating textures that would place my own notion of Shapwick on some kind of map; to create a geographic narrative.

I carried forward the notion of recording on four-track cassette – a very immediate recording medium, where there is little chance to manipulate the sound after the fact. This way of working shaped the project further and the medium suggested textures by itself – I had been using very old second-hand cassette stock that had been recorded on by others; subsequently, fragments of recordings already on the tapes showed up at various points and took on their own new lives in the tapestry.

The reality of Shapwick is probably quite different to the impression in my own mind, but nonetheless I think it’s interesting to form an impression based on how a place could be, just by passing rheough it in the dark…and building from there.”

Clay Pipe started in 2010, and that time has released lovingly hand-crafted editions of music by The Hardy Tree, Tyneham House, Thalassing, GP Hall and most recently Darren Hayman (an instrumental album, Lido). Find out more, and keep posted on the progress of the Shapwick vinyl, at Clay Pipe’s website.