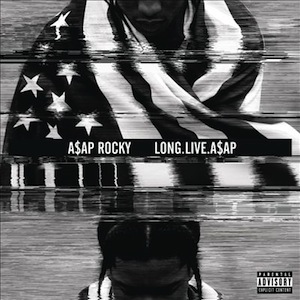 Long.Live.A$AP begins with a crack of thunder. It’s an appropriate opening bell for an album that is marked by a sense of sonic gloom that persists no matter what A$AP Rocky is musing about. For the Harlem rapper, that’s a good thing.

Rocky’s first full-length album side-steps the pitfalls of the typical major label rap debut, building on the promise of his breakthrough mixtape Live.Love.A$AP. For an artist who deals in style as much as substance, maintaining his pentagrams-and-Prada image and Memphis-imbued sound were imperatives that Rocky handles ably, even having the sense to explicitly tip his hat to Three 6 Mafia.

After that thunder clap, the title track does a wonderful job of establishing the album’s tone: weed smoke ambience and purple drank synesthesia, coupled with Rocky’s rat-a-tat flow and plenty of screwed-down grunts and gunshot samples. The song, which sounds remarkably similar to TNGHT’s ‘Bugg’n’, also foreshadows some of the album’s weaknesses: a reliance on well-worn lyrical tropes and underwhelming hooks (especially when Rocky sings them with an uneasy falsetto, as he does here).

Lyrically, Rocky mostly sticks to the signifiers of his preferred forms of conspicuous consumption. ‘PMW (All I Really Need)’, with its “pussy money weed” refrain, manages to reduce the album’s lyrical thrust to just three words. The only thing missing from that checklist is Rocky’s oft-reported love of haute couture. While not uncommon in the post-Kanye landscape, Rocky takes his fashion fanaticism to new levels: ‘Fashion Killa’ features name-dropping that would make Mr. West blush: Rocky should be thankful that so many Italian labels rhyme so well.

‘PMW’ happens to resemble another song by track producer T-Minus, Kendrick Lamar’s ‘Swimming Pools (Drank)’, so this is as good a time as any to address the elephant in the room. Despite his similar perch in the hip-hop world, A$AP Rocky isn’t Kendrick Lamar. His rhymes don’t have the lyricism and writerly quality of those of his West Coast counterpart. Yet at times, his street tales are similarly expressive, attributed by the confliction of blustering bravado and angsty vulnerability. A recurring theme on the album is Rocky’s “uneasy lies the head that wears the crown” complex, as he simultaneously proclaims his ascendance to the heights of hip-hop and ponders what that type of success means for a 24-year-old Harlemite who “thought [he’d] probably die in prison.”

Aside from these flirtations with honesty, a major component of the album’s strength comes from the like-minded producers behind the beats. Chief among them is Clams Casino, the New Jersey producer responsible for early Rocky tracks ‘Palace’, ‘Bass’, and ‘Wassup’. The digitally-skipping ‘LVL’ aims for the latter, resulting in one of the album’s strongest efforts, and the muted boom-bap of ‘Hell’ allows both Rocky and guest vocalist Santigold to shine. Hit-Boy helms lead single ‘Goldie’ (which, at nearly a year old, loses a bit of its luster) and guest-heavy ‘1 Train’, while Danger Mouse plays chameleon on the hookless ‘Phoenix’. The album’s low point, however, is Skrillex collaboration ‘Wild For The Night’: the dub-and-siren groove is just too much of tonal shift, even if the production is restrained by Sonny’s standards.

As for his collaborators on the mic, Rocky has a tendency to get lost in posse cuts (none of which feature his A$AP crew, who are conspicuously absent from the album). On the sing-along ‘Fuckin’ Problem’, one of his more memorable couplets (“they say money make a nigga act niggerish / but ‘least a nigga nigga-rich”) is long forgotten by the time Kendrick, 2 Chainz, and Drake show up. Similarly, the XXL Freshman Class cypher that is ‘1 Train’ is an interesting experiment, but one so obviously engineered for blog interest (guilty) that it’s tough to enjoy on its merits. It would have been better off as a segment at the BET Awards, rather than a six minute series of verses in the middle of the album.

Despite a few missteps, Long.Live.A$AP is bookended nicely by the introspective ‘Suddenly’. The song displays Rocky’s flow at its most versatile, as he alternates between languid and percussive and back. The vivid, nostalgic imagery (“We had cookouts and dirt bikes and dice games and fist fights / And fish fries and shootouts like one SIG with two rounds…”) gives way to a sing-song Bone Thugs-inspired bridge before Rocky goes double-time. As it closes, an album that started with a bang ends with a rowdy, let-the-tape-run fade out.

Considered separately, the bonus tracks are entertaining; a few could have made the cut for the proper album. There are a couple stabs at Raider Klan-esque horrorcore that act as diss tracks both stylistically (‘Jodye’) and lyrically (Rocky takes shots st Spaceghostpurrp on ‘Angels’: “Niggas claim they the God of black / Well your name is purple I’m the God of that”). Meanwhile, a solid-but-not-spectacular verse from Gunplay animates ‘Ghetto Symphony’, which solves the hook problem by sampling a melancholy Frou Frou lyric. ‘I Come Apart’, featuring a warbling Florence Welch and production from the man behind Kanye’s ‘Runaway’, is probably best left an afterthought.

At its core, Long.Live.A$AP succeeds because it lets Rocky be Rocky: a rapper with a unique voice and an ear for captivating beats whose lyrical shortcomings can be glossed over with healthy servings of charisma and panache. Live.Love.A$AP clearly touched on something in the zeitgeist, and Rocky (and equally important, those around him) know better than to let go of a good thing.