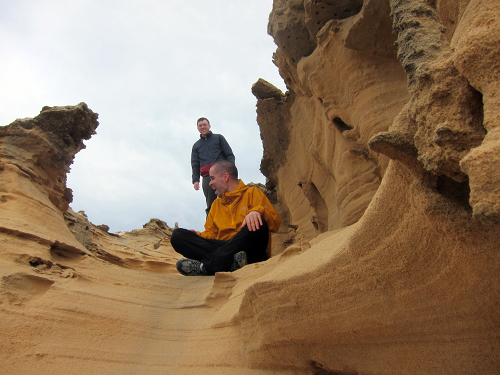 EVOL will return in April with a new LP of warp core hardcore.

Principally the project of Barcelona artist Roc Jiménez de Cisnero, EVOL currently features input from Scottish producer Stephen Sharp. Together, the pair engage in an esoteric process they term “Rave Synthesis”, a “deconstruction of rave culture icons under radically different compositional strategies.” This sort of thing is very modish, of course – check Lee Gamble’s Diversions 1994-6, or Lorenzo Senni’s Quantum Jelly – but EVOL pursue it with particular sureness of purpose: see 2010’s audio manifesto Rave Slime, or the Mentasm swarms of 2012’s Wormhole Shubz.  Whatever they do, they’ll always have a place in our hearts after their cluster bomb of a FACT mix  – a hyperspeed tribute to the Hoover sound featuring 105 tracks squidgled into 58 minutes.

The pair’s exercises with Rave Synthesis will continue on a new LP for Ediitons Mego. Proper Headshrinker will reportedly pick up where Race Slime left off, producing forensic reimaginings of classic early 1990s rave. Each track is exactly 3 minutes long, and promises a “focus on continuity, neighbourhood and iteration”. Mego outline the concept behind the record as follows:

The content of ‘Proper Headshrinker’ was first presented in public as part of the group exhibition ‘Recurrence, repetition, hypnosis and ritual’, curated by Paul Purgas at Färgfabriken, Stockholm, 6/12/12 – 13/01/13. In the show, right next to the speakers playing these tracks, the sentence “Like a balloon producing balloons, producing balloons” was printed on the wall in Pantone 805 fluorescent red, the same colour used on the cover of the album…

Sharp and Jiménez de Cisneros have used key words such as “slime”, “stretching”, “sonic Play-Doh”, “squeezing” or “folding” to illustrate the notion of homeomorphism (a metaphor borrowed from topology) in relation to the structural developments and the way in which tone bends in their Rave Synthesis tracks. In ‘Proper Headshrinker’, though, this continuous deformation is much more oblique, since the only source of variation in these monolithic structures comes from subtle phase modulations. The resulting straightforward brutality demands deep listening and, as usual, proper playback volume.

Proper Headshrinker is due on April 15 on Editions Mego.