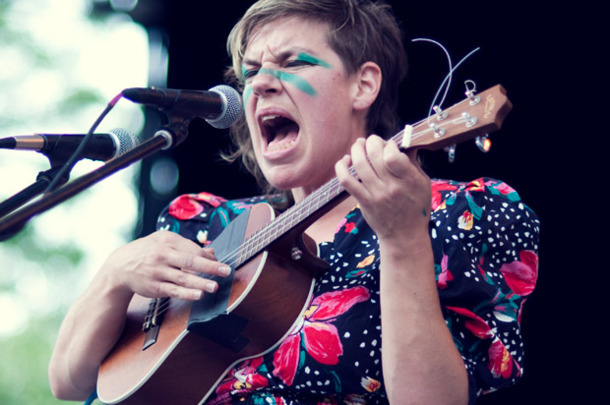 Back in 2007, Yoko Ono released the Yes, I’m A Witch remix compilation.

The collection saw the likes of DJ Spooky, Peaches, Cat Power and The Flaming Lips rework tracks from across Ono’s extensive back catalogue. As Pitchfork report, Ono is going to release a second instalment of Yes, I’m A Witch later this year, and she’s prefacing the release with a small-scale 10″ covers series.

The latest release in the programme arrives courtesy of Merrill Garbus’ odd-pop project tUnE-yArDs. Garbus will cover ‘We’re All Water’, taken from Ono and Lennon’s 1972 LP Some Time in New York City. The flip, meanwhile, will feature a remix of Ono’s ‘Warrior Woman’, taken from 1973’s Feeling The Space. Garbus previously joined Ono to perform ‘We’re All Water’ at the Plastic Ono Band’s residency at L.A.’s Orpheum back in 2010.

All profits from the 10″ will go towards the Rockaway Waterfront Alliance charity, which assists families affected by last year’s Hurricane Sandy. According to Garbus:

“Getting familiar with Yoko’s vast body of work has been a true education for me. When it came time to choose one of Yoko’s songs to cover, and then later one to remix, I had the opportunity to delve into the ground-breaking, punk-before-punk, radical, brave and brilliant work she had done, album after album. More musicians should learn Yoko’s history as a songwriter and performer– she’s been light years ahead of us for decades.”

The release drops on Chimera Music later today. Ono recently announced she will reconvene the Plastic Ono Band this month to celebrate her 80th birthday. She will also curate this year’s Meltdown Festival at London’s Southbank Centre from June 14-23.