Hip-hop box-set kings Get On Down to reissue Ghostface Killah’s Ironman, complete with jigsaw puzzle

Boston hip-hop archaeologists Get On Down have announced their latest special edition, a box-set version of Wu Tang member Ghostface Killah’s Ironman. 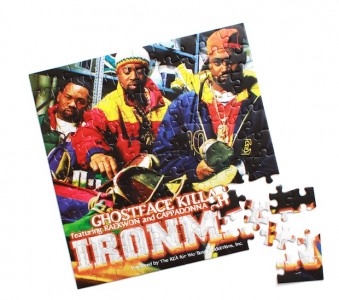 Released in 1996, Ironman marks the first solo album from the man who stepped up first on 36 Chambers, spawning classic singles ‘Daytona 500’ and ‘All That I Got Is You’. It’s not the first time Get On Down have tackled the Wu back catalogue: last year saw a magnificent reissue of GZA’s, complete with accompanying chess box, as well as a purple cassette addition of Raekwon’s Only Built 4 Cuban Linx.

The ‘Premium Collection’ edition of Ironman will be released as a CD box-set, limited to 2,000 copies. Pitchfork report that it features the album, remastered on 24k “audiophile gold disc” CD, housed in a “cherrywood trophy box” with a plaque, accompanied by a 48-page hardback book and a jigsaw puzzle of the original artwork.

For more information, head here. The set will be released at the end of February.

Tags: Get On DownGhostface Killah