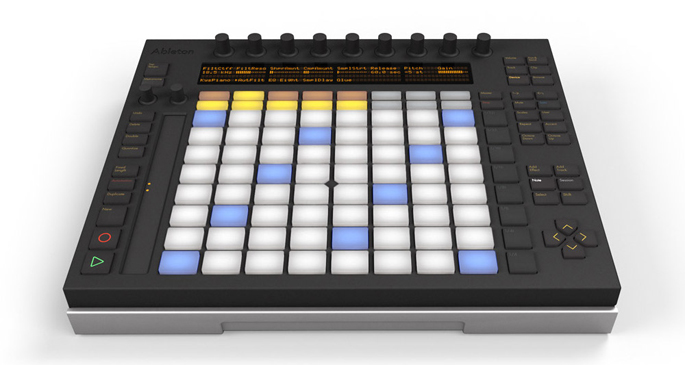 It’s that time music producers the world over have been waiting for – Ableton Live 9 is finally here.

The most visible change since the release of Live 8 is the inclusion of the company’s new controller/performance tool Push, which adds a whole host of new functionality to the program as well as adding that live element electronic musicians are constantly wishing for. Billed as a ‘new instrument’, Push finally allows Ableton users a sort of scratch-pad and composition tool for composing, as well as for simply DJing and performing live.

Where previous controllers were based around clip manipulation and triggering, Push seems to have been rebuilt from the ground up, taking influence from Akai’s innovative MPC architecture and adding a selection of tools that actually aid creation rather than stump users into simply thinking in terms of loops. A producer can use the controller as a keyboard (even selecting specific scales or note-groups to play within), as a beat trigger for loops or samples or as a sequencing aid, and this versatility is the key to actually making Push stick around a little longer than the short-lived Akai APC controllers and similar.

The software itself has also had a massive overhaul, and from the looks of it, it seems like as usual the team have listened to what their users have been chomping at the bit for and thrown them a bone. Apart from the spring-cleaning to make the interface a little faster, Ableton have added the brand new Glue Compressor which we would guess will be popping up in probably 75% of all tracks within about a month. Developed along with Cytomic, and based on a classic 80s bus compressor, this is Ableton’s move to silence naysayers and prove that their software plugins can truly compete with outboard equipment. Since the compression was one of the pieces of the puzzle that never really fitted as well as it should have done, it remains to be seen whether the Glue Compressor really sticks.

Midi heads can also rejoice as Ableton have finally added some features to appease the tinkerers – now automation can be recorded into clips, which should allow just about anybody to make it sound like they spent and entire evening doing complex edits, which has to be a good thing, right?

More information and pricing can be found here.