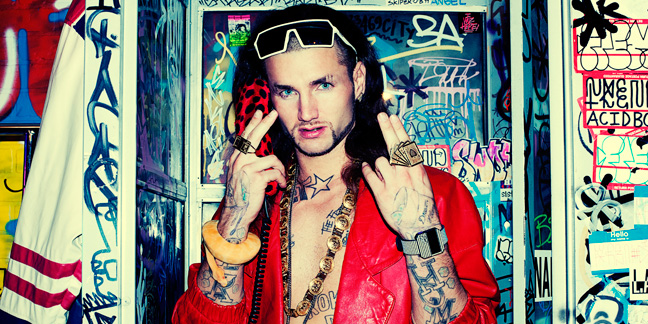 “It’s going to be a monumental album.”

You’ll likely have made your mind up on RiFF RaFF by now: either he’s a refreshingly self-aware hip-hop harlequin, or a bewildering fever dream, elevated to icon status by mischievous bloggers and halfwits. Opinions are set to be confirmed or confounded on his forthcoming studio debut for Mad Decent, the follow-up to last year’s Birth Of An Icon retrospective.

Speaking to DJ Semtex in London this week, the Texan peacock confirmed that the album will be called Neon Icon. Following on from the news that he’s been recording with Drake , the rapper also revealed that fellow rapper-cum-jester Snoop Dogg is lined up to appear on the album. A$AP Rocky will guest, as will stoner rapper turned chart star Wiz Khalifa. Mac Miller and YG are also confirmed to appear. According to RiFF RaFF:

“I got these big names on [Neon Icon] You know when you’re working with [Diplo] , I’d rather work with a big producer who works with big artists—Future, Drake…it’s going to be a monumental album.” [via HipHopDX]