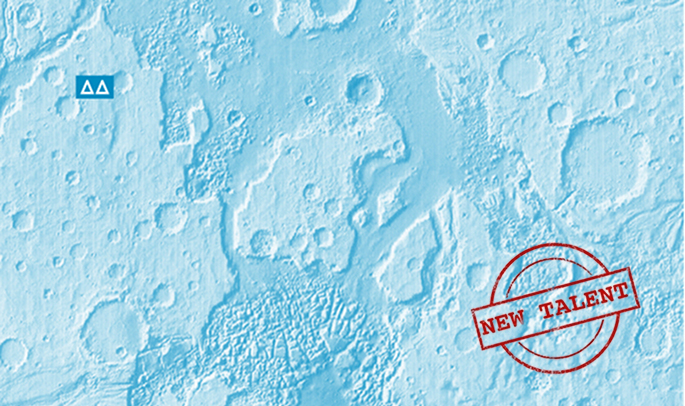 As noted in our Labels To Watch in 2013 feature, RAMP offshoot Fourth Wave has done a fine curatorial job in its first year

Felix Lenferink, Presk and the fiercely exciting Gerry Read are among those to have shaped the label’s character and fortunes. One of Fourth Wave’s lesser known acquisitions, however, has also turned out to be one of its strongest: ∆ ∆, aka Greek producer Dimitri Dimas. Dimas actually debuted back in 2011 with Swamp81 tribute ‘Sportex’, issued on Texas label Pushing Red with an Ikonika remix on the flip. It took this year’s Skyway EP for him to find his feet and his sound, and the results were straight-up delightful.

Those Fourth Wave touchstones – crisp, tactual percussion; an ambivalent relationship to the dancefloor; a general ambrosial quality – are present and correct in his music, but there’s also something hard to finger about Dinas’ work. It’s a triumph of awkward joins and impressionistic smudges – check the Buckaroo lurch of ‘Coconut Girls’, or straight-outta-Hazyville closer ‘Let In Morning Light’. There are twists, too: see the way ‘You’ unexpectedly cuts the beat and segues into doo-wop. In a battle of the deltas,  FACT (or, as our logo has it, F∆CT) caught up with ∆ ∆  to talk early beginnings and future plans.

Thus far, biographical details about you have been pretty thin on the ground – is there anything you can tell us about yourself (who you are, where you’re based, when you started producing)?

I’m Dimitri, I live in a suburb south of Athens and I’ve been playing music since I was 12. Growing up I was mostly involved in bands as a drummer and I gradually started working on my own stuff, it was a pretty natural progression.

What attracted you to Fourth Wave?

Besides being a part of RAMP, a label I’ve been a fan of since its very beginning, Fourth Wave has an overall aesthetic and feel to it that I instinctively gravitated towards. I feel there is a subtle, underlining theme with every record, but each and every one of them explores it from a personal perspective, while contributing to a greater whole. They make cool records basically!

Which artists inspire you? Are there any musicians/producers you count as key influences in particular?

There are so many I could mention, it’s pointless to start namedropping people. All I can say is that I admire those who just do their own thing and follow their own vision. It doesn’t necessarily have to be a musician or producer or even an artist, everyday life is the most inspiring.

How would you describe the Skyway EP?

Tracks like ‘The Cleansing’ seem as indebted to old psychedelia as contemporary house and techno; ‘Loose & Limber’ plays like a fragmented dub riddim – do you consider Skyway a club record, or is it something else entirely?

Like any other record, it is what you make of it. I don’t really understand the need to dissect and categorize everything, so it fits under a certain label. After all, who’s to say what belongs in a club and what doesn’t? You can certainly dance to it or you can just kick back and vibe to it. Out of all the songs I’d recorded, those that ended up on the record where the ones I had the most fun working on, where I was relaxed and in the moment. My main focus was more on the textures and the colors of the songs and how they felt as a whole. I just wanted them to breathe.

Your music is, for the most part, lush and densely textured. I wondered if that might be a deliberate reaction to the shift towards tougher/harsher/darker sounds in house and techno at the moment .

That might be accurate, but again I was just trying to do my own thing. It’s what felt natural, I wanted to make an honest record, regardless of what’s being going on at the moment.

Thanks in part to that recent Into the Light: A Journey into Greek Electronic Music retrospective, I’ve noticed a bit more collective curiosity about the Greek electronic community in the past few months. What’s the state of the scene like at the moment?

It’s definitely growing and moving in so many different directions. It’s exciting to witness this growth and really comforting that there’s some pretty interesting and original stuff coming out lately, I’m positive that it’s got a lot more to offer.

What projects are you currently working on?

I’m working on my next 12” for Fourth Wave and we’ll see what comes after that, I prefer to take it one step at a time.