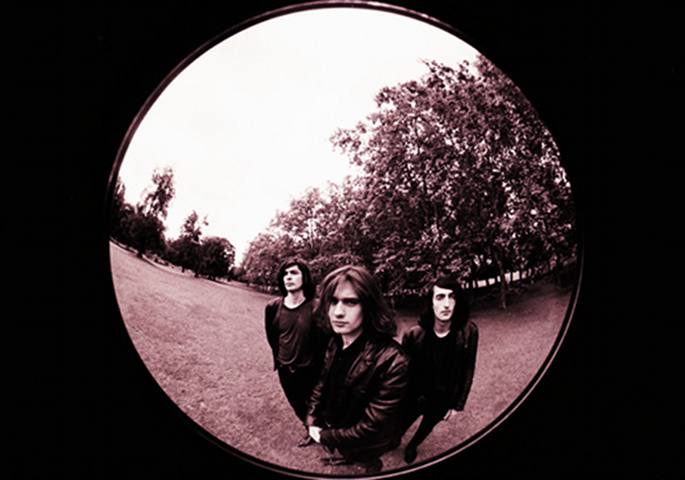 “I get asked at least once a month to re-form Loop and the answer is always no. I just don’t want to do it.”

So uttered Robert Hampson in an interview with FACT last year. As we found out earlier today, Hampson’s obviously been badgered into submission: the much-loved space rock unit are to reconvene to headline and curate the last ever UK All Tomorrow’s Parties festival.

Hampson has also now announced that Loop are to reissue two of their best-loved LPs. 1988’s Fade Out will arrive in June, with 1990’s A Gilded Eternity set to follow in August. Both discs wil be available as 45rpm double vinyl, and have been remastered from the original analogue source. Each record will be limited to 3000 copies.

Fade Out, originally released on indie stable Chapter 22, sees the Croydon three-piece pick up where Heaven’s Gate left off, smothering sludgy guitar riffs in seas of reverb and layered drones. Situation 2 release A Gilded Eternity, meanwhile, is even more aggressive, showing off Loop’s guitar play at its most abrasive (and, on ‘Blood’, its most elliptical).

Hampson has issued a touching statement about Loop’s forthcoming reunion and reissue package, presented below;

It seems that as much as you try to run as far as you can away from it, your past will always haunt you. I have never really slept well over the demise of Loop, it always felt unfinished. If I had a pound coin given to me for every time I get asked to reform Loop, I’d be a very rich man by now. I had always baulked at the idea, especially when I have been asked to perform songs with a pick-up band, something I could never do… ever. It’s not that I am precious, but at the same time, without John and Neil holding down that centre, I’d never be able to wave, it would never be the same.

I’m so proud to say that the line-up of John Wills, Neil Mackay, Scott Dowson and myself have agreed to perform a limited number of shows from late 2013 to mid 2014 at various venues across the world. To perform from all stages of the Loop arc, enjoy it again, hoping that we make plenty of people happy again and maybe give people a chance to see it for the first time… then, we can put it finally to rest with a better feeling of completion and that a chapter is really over. I sincerely hope it maybe refreshing to us and to others. For some, it may simply not be on their radar anymore. Well, it’s simple enough for them, don’t buy a ticket. It’s going to blink and you miss it because it’s not going to be around long, I refuse to prolong it and for it to become embarrassing. It’ll be sharp and to the point…straight to your heart and then, it’s gone.

Fade Out is due on June 10, and A Gilded Eternity is set to arrive on August 19. 1987 compilation The World In Your Eyes, which collects the band’s 16 Dreams and Spinning singles, will also get an LP re-issue in 2014. Fade Out opener ‘Black Sun’ is below. Back in April, Editions Mego released Ablation, the new album from Hampson Main project.