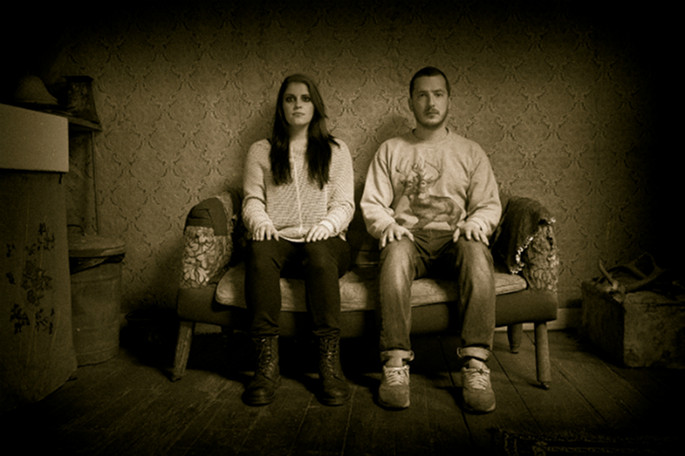 Throwing Snow and Augustus Ghost have announced their debut album as Snow Ghosts, A Small Murmuration.

The London-based Throwing Snow has been releasing magic on labels like Ho_Tep, Local Action and his own Snowfall imprint for several years, and recently signed up with Fabric’s new in-house record label, Houndstooth. His work with vocalist Augustus first emerged on the Black Acre-released Lost at Sea EP, and then on that aforementioned Local Action release, where Augustus featured on ‘Pyre’ and ‘Equuleus’). Last week, they released the first video from A Small Murmuration, ‘Murder Cries’.

Speaking to FACT about the project last week, Augutus explains that Throwing Snow “was one of the first friends I made when I came to the UK nearly 6 years ago.

“We had a lot in common despite having lead very different lives up to that point. I grew up in the Middle East, while Ross lived on a farm somewhere in the North of England, but we still shared a passion for similar music, literature, film and art.”

“The intentions at the start”, Throwing Snow continues, “were to just write some music together, there were no preconceptions or goals. When we wrote ‘Lost at Sea’ and Ian from Black Acre liked the track we began to see that there maybe an outlet for what we were doing and by that time we had found more of our sound.”

When asked about Snow Ghosts’ relationship to Throwing Snow and how A Small Murmuration sounds, he explains that “it’s more song based and dark in a way the Throwing Snow stuff isn’t. There is obviously going to be some similarities because of the way I produce and the sounds I like, but there is more free reign to be different in the Snow Ghosts stuff … The album tracks wildly differ but have the same over all aesthetic. There is a really dark track with Blue Daisy on there, some beat-lead tracks but then there is also an acoustic guitar track. Strings feature quite heavily but then so do field recordings, it’s in the realms of dance music but also song driven and melodic. Hopefully people will hear that it hangs together well although all the tracks feel different.”

“There is a definite theme running throughout the album”, concludes Augustus. “I wanted the lyrics to have a really timeless feel, and accentuate that darkness repeats itself throughout time in different forms…and we feel the music echoes this. Saying that, there are some really uplifting and gentle parts of the album…I can’t wait to share it all.”

A Small Murmuration will be released on June 17, while Throwing Snow will also debut a new alias, Alight, this Summer. The album’s tracklist follows.