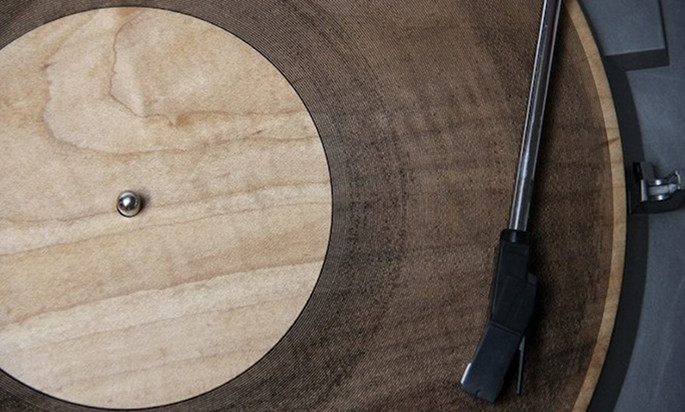 In the same week that some invidious nutjob opened Pandora’s box by firing the first gun produced by a 3D printer, a software designer/hardwood etcher has used the technology for altogether more benign ends.

Amanda Ghassael has produced the world’s first laser-cut vinyl disc made of wood, made using a 3D printer and cut with grooves up to ten times the width of standard vinyl. Ghassaei’s first output includes The Velvet Underground’s ‘Femme Fatale’ and ‘Sunday Morning’ etched on maple, and a copy of Radiohead’s ‘Idioteque’ printed on ply (they should have gone with ‘Treefingers’ – Missed Opportunity Ed). The fuzzy, granular results are available below.

Over at Instructables, Ghassael goes into detail about the process behind the vinyl:

These records were cut on an Epilog 120 Watt Legend EXT to a theoretical precision of 1200dpi (the kerf of the cut and some tricks I used to avoid crashing the laser cutter dropped the actual precision down by ~1/6).  The audio on the records has a bit depth between 4-5 (typical mp3 audio is 16 bit) and a sampling rate up to about 4.5kHz (mp3 is 44.1kHz).

Ghassaei has also made the vector files available to download, allowing 3D printer owners to produce their own bespoke pine-yl. The optimum tracks to use? “Songs that are very full in the lower to mid range, but also very sparse overall are best”. [via The Vinyl Factory]