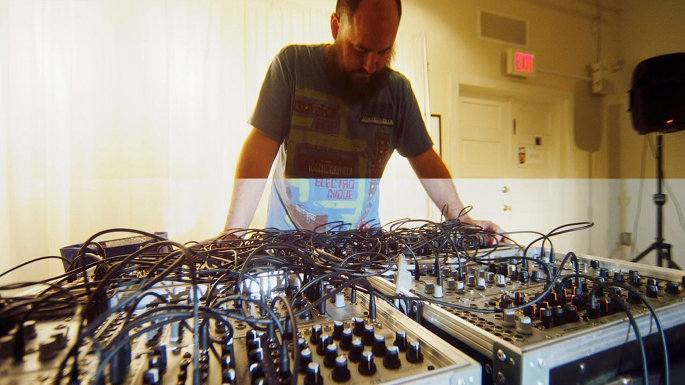 Fullerton Whitman’s had a fascinating musical journey to date. He worked across a vast array of aliases in the 1990s, playing guitar in outfits with fruity names like The Liver Sadness and Sheket/Trabant, and earned particular notoriety for his frenzied breakcore under the Hrvatski moniker. The 2000s saw him turn out releases on Kranky, Editions Mego and Carpark, with the results tilting from ambient drift through to fiercely complex algorithm-based compositions. The latter have become a particular interest in recent years, as embodied on last year’s exceptional Generators LP. His last record was Live Occlusions, released on Protracted Audio in January.

Printing press and art label Shelter Press have now issued the Split 12″, featuring contributions from Fullerton Whitman and Belgian artist Floris Vanhoof. Fullerton Whitman handles Side A, offering the four-track ‘Jardin Electronique’ suite. In contrast to the frantic bleeps and chirrups which characterise his recent work, Fullerton Whitman’s side sees him on pretty, tuneful form. Side B will feature a Vanhoof drone piece, created exclusively on analogue synthesiser. Shelter Press promises the sound of “two modular experimentalists stretching the world map”, which is more than alright by us.

Split will is out now on 180g vinyl, and is limited to 400 copies. The album was cut by Rashad Becker at Dubplates & Mastering in Berlin, and comes packaged in a 3 colour silkscreened cover from Hannah Geise. Fullerton Whitman’s lyrically titled ‘Automatic Drums With Melody’ is available to stream below. [via Resident Advisor]