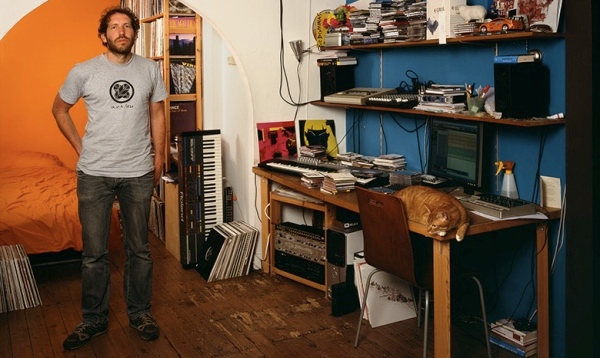 Active since 1996, Delsin began life as an outlet for owner Marsel van der Wielen’s work as Peel Seamus. As its roster expanded – Aardvarck, Newworldacquarium and Future Beat Alliance all put out formative releases on the label – it developed into a reliable stable for deep techno, electronica and rolling breakbeat productions. When Conforce, A Made Up Sound, Sterac and Shed are on your books, you know you’re onto a good thing; a sub-label, Ann Aimee, has also provided an outlet for deeper and tripper fare.

As announced yesterday, Delsin are to toast reaching the 100DSR threshold (note: they’ve craftily disregarded their many reissues and sub-label releases for the occasion) with a deluxe box set, featuring five new EPs and a compilation. The set will collect material from the likes of Claro Intelecto, Gerry Read, Delta Funktionen, Newworldaquarium, Redshape, Conforce and more.

In the run-up to the release of the first EP on June 24, Delsin will drip-feed out each of the five EPs featured in the box set. The first, 100DSR/VAR1, is due at the tail-end of the month, and will feature material from Intelecto, Read and Unbroken Dub; fragments of their respective contributions are available to stream below. We spoke to van der Wielen to get the lowdown on the forthcoming set, plus his future plans for the imprint.

How has Delsin evolved over its 100 releases? Is it a very different label to the one you started?

In a way it is yes. If I look back to when I started it was all very romantic and naive, almost kinda clumsy. I didn’t know anything about mastering, or packaging, marketing, distribution, all those things etc – that has changed. Although musically I think it didn’t change that much, as already the first 15 releases set a broad spectrum, as from ie. beats trickery by Aardvarck towards house by Newworldaquarium, both way back in 2000. So the content hasn’t really changed, but it changed in that way, as I’m much more aware now of what’s being put out, in which setting, which audiences etc

You talk about going “back to the core of Delsin” – how would you describe that “core” sound?

When I started kinda up till the Going Thru Life-compilation, all releases had same kinda otherworldy/melancholic/moody sound. A more kinda introvert sound so to say, not with any dancefloor or listener or whatever in mind. Also the previous compilations Delsin II (76DSR) and Day By Day (32DSR) were more a collection of individual tracks, but now I try to connect them again together, as done with Going Thru Life (15DSR) and Planet Delsin (50DSR).

There’s a real mix of old and new on the compilation, with Gerry Read sitting next to Claro Intelecto. What sort of story were you trying to tell when you were curating and sequencing the record?

Hmm, it’s hard to catch those things in words. Same as it can be for an individual artist to describe his music. But for me it’s kinda like curating a soundtrack of movie of which I don’t know exactly the script of. More kinda moodboard. I’m still sorting which artists and tracks, and especially with this 100th release I’m trying to get also some of the older heroes on board again. Although it’s yet a bit to early to say which ones, also as I don’t want to put too much pressure on them and their creativity.

What can we expect from the box set – any special design, or bonus goodies?

The box will be designed/manufactured/assembled by Graphic Surgery – who are taking care of the artwork & design since early last year. They already have some exciting ideas, and probably we’re gonna pick some days to get something together. For specials, I don’t want to put out music exclusively, but we try to in packaging, artwork, vinyl colours and stuff, maybe we add an exclusive shirt or print or some. Not sure yet, all in progress.

What plans have you got in store for the next 100 Delsin releases?

Ha, no idea, if there will ever be 200DSR, future will tell, curious myself as well. I like the way it’s going at the moment – I kinda focussed it to more techno after 50DSR, and over the last years it broadened again, with smaller experimental releases by Herva, next to dancefloor stuff by ie. Mike Dehnert, to more ambient/folk stuff ie. by John Beltran.