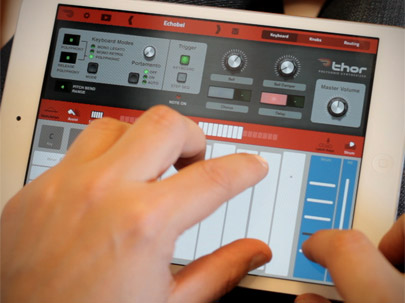 Propellerhead, the company behind music production program Reason, have made their flagship soft synthesiser Thor available for iPad.

Billed as a “polysonic” synth that “sounds like [nothing] you’ve ever heard before”, Thor utilises six different oscillator types, four filters, FX and a step sequencer, and – in its iPad form – can be controlled via touch screen. As Music Radar point out, it also “features a resizable chromatic keyboard with a Collapse function, which allows the keyboard to fold down to feature just the notes in a selected scale. The keyboard also features Strum and Hit modes, allowing chords to be strummed with the swipe of a finger, or triggered as a single hit.”

Oh, and despite its grand name, which as the likes of Razor and Massive will tell you, is crucial when it comes to selling a soft synth, the iPad version will cost a very reasonable $14.99.