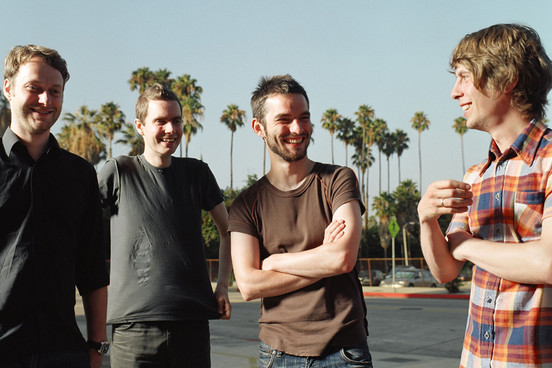 Sigur Ros: kings of the soaring soundtrack, inventors of their own language, and now, it seems, budding DJs.

The XL-signed Icelandics, who recently released new album Kveikur, will play a headline DJ set at Boiler Room Berlin tomorrow (under the alias Triple Nipple, no less – the group have previously used the name at a party on Sunset Boulevard).

Given the group’s tendency to be incredibly awkward on camera, it’ll be interesting to see how it goes (we wouldn’t expect any Thom Yorke-style dancing, for a start), though the show’s description claims that they’ll be “play[ing] a bunch of [material from Kveikur] alongside some of their much loved catalogue. On paper, there are few bands whose songs could slip into each other more blissfully when DJed – and it’s worth noting that the group’s Jonsi has previously spun at a New York gig with his collaborator / partner Alex, so there’s some experience there.

this is not going to be wall-to-wall, hair-tossing post-rock. there will be no glacial soundscapes of awesome dimensions. neither warm bubble baths of yoga wind-down muzak. (or any of the other enduring cliches about sigur ros). instead triple nipple represents what sigur ros do when they are off-duty – you know, for fun. some of it may be tough, cool and futuristic, some of it will no doubt be high-aroma fromage. most of the cool stuff comes courtesy of sigrun jonsdottir, the band’s trombone-wielding authority on baltimore club. guitarist kjartan holm, meanwhile, pitches in with some minimal hip-hop, orri with some dubstep and, yes, you’ve guessed it, jonsi brings the extensive cheeseboard. no-one involved lays claim to be able to mix, even remotely. this is how sigur ros get down and unwind in the dressing room and on the tour bus after a show. if you’d like a window on their world, come on in. if you are expecting a mystique enhancing exercise of deep solipsism, look away now.

Support comes from The Orb’s Thomas Fehlmann, Emika, Oake and Marius Reisser; the show runs from 8pm-12am CET. You’ll be able to tune in at Boiler Room’s website.