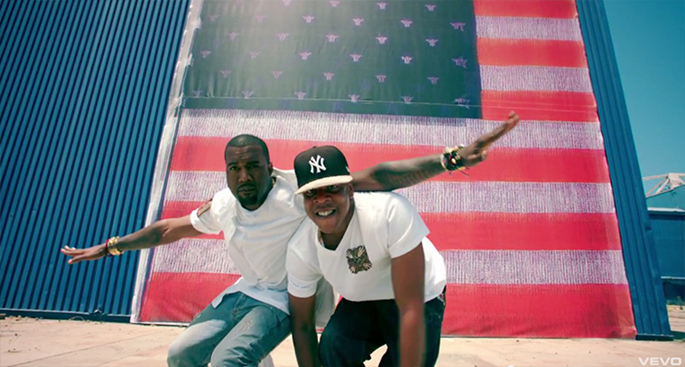 Some Twitter back-and-forth between Hudson Mohawke and Mike Dean appears to have let the cat out of the bag re: Watch The Throne 2.

In May of last year, Kanye producer Dean announced that he’d been signed up for a sequel to Jay-Z and Kayne’s all conquering Watch The Throne LP – although, considering work was yet to begin on the project, the news was provisional with a capital-P. Almost a year on, Dean has once again offered some insight into the progress of the record.

Following the release of Jay-Z’s new album Magna Carta Holy Grail, Hud Mohawke took to Twitter to give the album a fairly lukewarm review (something which, on first listen, we’re minded to concur with). Amongst his messages:  “hove is not quite ready, had a gang of my stuff to choose from n passed up on it for his record. Ye on th other hand unafraid to take risks”, and, later on, “”This record could’ve came out 10yrs ago n no one would’ve batted an eye lid”.

At one point, Dean responded by asking “why the negativity? crown = goat track…easy!”, with Mohawke responding “not negativity just honest opinion i think it’s lazy, just my own opinion. Not hating”. Dean’s reply is the money tweet: “all g, just we’re all fam. don’t burn your bridge for WTT 2!”

Hud Mo noted “you just set the Internet on fire w that wtt2 comment hahaaa”, and Dean again replied “yep. It’s happening.” Also worth noting: Mohawke mentioned that he’s been working on the Pusha T album, which should be a treat. Dean’s recent interview with The Huffington Post, incidentally, is an absolute must read. Our piece on the implications of Magna Carta Holy Grail‘s release model is available here; alternatively, check our producer-by-producer guide to Jay-Z’s discography.