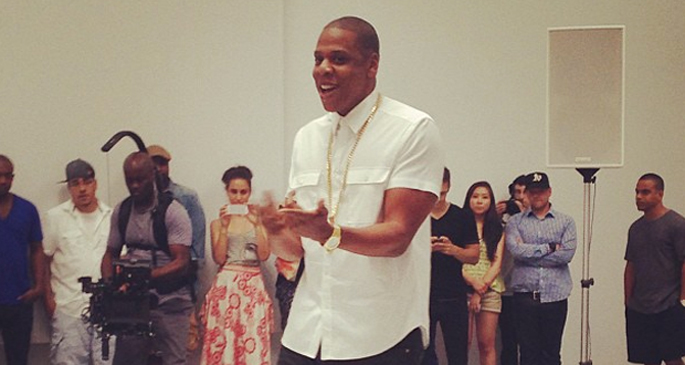 The one where Jay-Z took the performance art world by storm.

FACT’s Tom Lea might not have had much time for Jay-Z‘s brand new album Magna Carta Holy Grail, but that hasn’t dented the rapper’s sprawling (and admittedly quite interesting) PR campaign. Today he dropped into New York’s Pace Gallery and is currently lip synching his way through an epic six-hour performance of album track ‘Picasso Baby’. Apparently the performance will be chopped up into a video at some point as part of Jay-Z’s recently revealed ‘six pieces of art’, and as you can probably expect there were plenty of high profile guests in tow.

As FADER notes, the video is inspired by Marina Abramović’s 2010 MoMA exhibition The Artist Is Present, wherein the visual artist sat in MoMA’s atrium for album two months; Abramović was on-hand today. The shoot was arranged by New York gallery Salon 94 and famed video director Mark Romanek, who is best known for Jay-Z’s ’99 Problems’, Nine Inch Nails’ ‘Closer’, Michael and Janet Jackson’s ‘Scream’, and Fiona Apple’s ‘Criminal’; the video will supposedly have the “grainy, surveillance camera feel” of the latter.

Rapper Wale gave his blessing, as did Judd Apatow and Girls star Adam Driver, and we’re certain plenty more famous faces will emerge over the evening. For now you can check the growing series of Vines below. [via Zap2It]