A Field In England soundtrack prepped for limited vinyl release 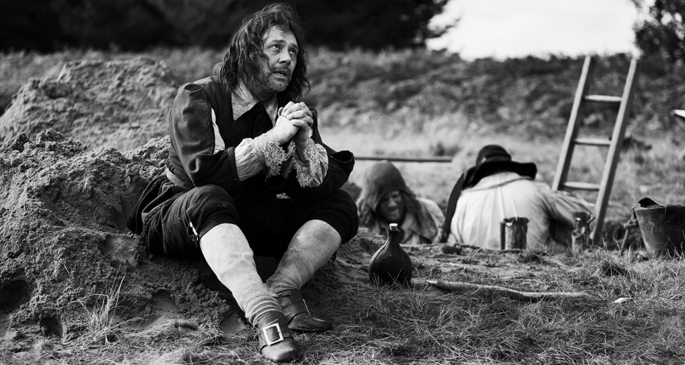 Hint: it’s not about Glastonbury.

Ben Wheatley’s A Field In England has been confounding audiences since its release earlier this year with its psychedelic blend of English Civil War imagery and macabre grindhouse themes. Featuring A League of Gentleman’s Reece Shearsmith and The Mighty Boosh’s Julian Barratt in lead roles, there are no doubt plenty of viewers who will likely be perturbed to discover the film’s lack of comic turns, but the rest of us can revel in its greyscale gloom.

The soundtrack certainly supports Wheatley’s twisted vision, and is due a limited release on Rook Films who are set to press up a mere 400 signed copies. Clocking in at two LPs, veteran British composer Jim Williams handled the score itself (no doubt brought in again after handling the soundtrack to Wheatley’s acclaimed Kill List), and the record also features the track ‘Chernobyl’ by Blanck Mass (Fuck Buttons‘ Benjamin Power) and ‘Metallic Fields’ which was put together by Wheatley and the film’s sound designer Martin Pavey.

Just because it’s limited edition vinyl and these sort of things demand it, there is a set of specially commissioned new artwork from Luke Insect and Kenn Goodall (aka The Twins of Evil), and if you fancy hearing some of the material, check out the film’s  mind-twisting trailer below.

A Field In England OST will be released August 1 via Rook Films. [via Juno Plus]