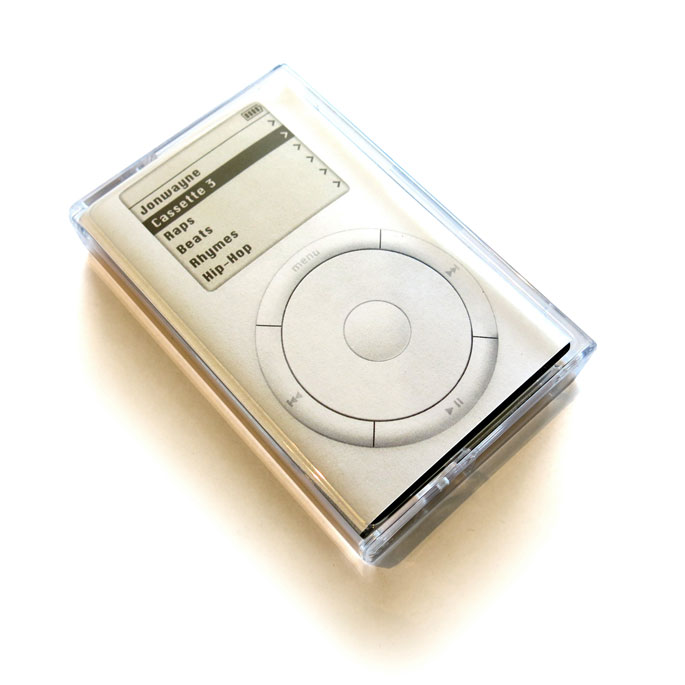 Stones Throw have just released the last part of Jonwayne’s tape trilogy of beats and raps, and this time there’s a free digital version for those without a boom box or analog fetish.

The last episode in Jonwayne’s inadvertently epic, corporation-challenging series is billed as the “world’s first analog iPod” and named after the birth name of John Wayne the actor, who apparently took his screen name from the rapper’s (real name Jon Wayne) great-great-great-great-great uncle. The Marion Morrison Mixtape is another L.A family affair featuring 37 minutes of rap related fun with Jonwayne, Flying Lotus’ rap alter-ego Captain Murphy, Jeremiah Jae, Zeroh and Oliver the 2nd all dropping verses. The beats come from Stones Throw’s young prodigy and the wider rap ether – his jacking of Pusha T’s ‘Numbers On The Boards’ being a highlight.

Aside from the musical content, one of the most entertaining aspects of the series has been its design, and the woes that have come with it. Overseen by Stones Throw’s visual mastermind Jeff Jank, the first Cassette was designed to look like a pack of Marlboro cigarettes. Sometime after its low-key release Stones Throw were hit by a cease & desist letter from Phillip Morris claiming the label had infringed their distinctive font as well as two U.S trademarks. Turns out Phillip Morris owns the pyramid shape that signifies a pack of Marlboro.

Having learnt their lessons, Stones Throw released Cassette 2 earlier this year, with more of Jonwayne and friends (including Jeramiah Jae, Zeroh and Detroit’s Quelle) getting silly on the beats and raps. This time the design offered no possible way of the same thing happening again.

Cassette 3 concludes the saga and as you can see from the image above, it’s yet again copyright-infrigement proof.

Meanwhile we still await Jonwayne’s debut for Stones Throw, which will hopefully come before they get sued into the ground.