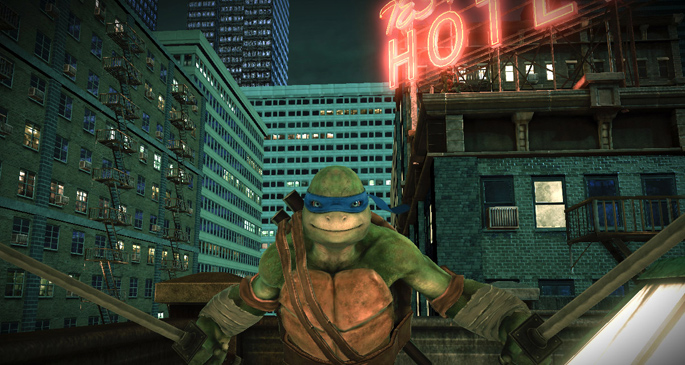 Heroes in a trap shell.

Rap producer Just Blaze has been roped in to add music to Activision’s new videogame Teenage Mutant Ninja Turtles: Out of the Shadows, and almost predictably he’s a big fan of the pizza-slingin’ green dudes. While the game is based on Nickelodeon’s 2012 animated series rather than the comics, movies and bad cartoons we grew up on, 80s babies who grew up with a fond place in their hearts for the foursome will no doubt still get a kick out of seeing them haul shell again.

Blaze assures us that this new adaptation isn’t far from the classic TMNT arcade game, saying “The thing I like about this was that it kind of feels like a modern take on the original Turtles game, which was definitely a classic in the ’80s, it definitely took a lot of quarters from me” which at the very least makes us interested to check it out.

He ends the brief spot by picking out his favourite turtle (we all had one, come on), but it turns out he’s conflicted: “I can definitely relate to [Donatello’s] love of all things technology and geek-related. I get that. But I always thought it was Raphael’s attitude. I would have to split it between those two.”

You can check the trailer below.

Teenage Mutant Ninja Turtles: Out of the Shadows will be released on Xbox Live Arcade, the Playstation Network and PC on August 28. [via Rap Radar]