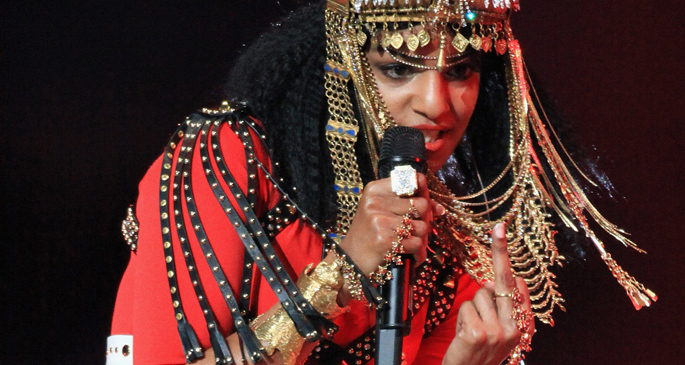 Remember the Superbowl back in February 2012? Yeah? Well you probably remember when M.I.A. ‘shockingly’ flipped the bird to the camera and sent middle America into a tailspin in the process.

At the time it wasn’t obvious if M.I.A. would be liable for a fine from the FCC, but in the months since, neither the FCC or hosting channel NBC have pursued action against the singer. We all thought that the matter was long forgotten to be quite honest, that is until The Hollywood Reporter revealed that the NFL itself was in the process of suing M.I.A. for $1.5 million and a public apology, saying that her “offensive gesture” was “in flagrant disregard for the values that form the cornerstone of the NFL brand and the Super Bowl.”

The case has been going on for over a year at this point, and doesn’t seem to be reaching any kind of resolution. The NFL are claiming that M.I.A. have damaged their “wholesomeness” and M.I.A. of course is offering a typically stony stance on the matter. Her lawyer Howard King opened up to The Hollywood Reporter, and said that his team are “planning an all-out assault on the NFL’s claims of being a brand devoted to high morals,” and it seems that this assault will be crowd-sourced.

While it might seem like an unusually timely move given that M.I.A.’s fourth album Matangi is due to emerge in just over a month, the singer has asked people to “submit their examples of how the actions of the NFL, its stars, coaches, advertisers, broadcasters, team doctors and owners have damaged or destroyed any vestiges of any reputation for wholesomeness ever enjoyed by the NFL.”

Crowd sourcing material for a legal battle might seem far-fetched, but come on, if anyone’s going to do it it’s going to be M.I.A. [via Pitchfork]