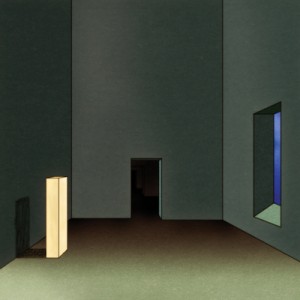 Since the 2009 release of the Rifts compilation, Oneohtrix Point Never has occupied a unique niche in the electronic underground. Though you could loosely bundle him in with acts like Emeralds and M. Geddes Gengras, his emotionally affecting hybrids of drone, kosmische and New Age tropes have always been quite singular. Returnal lashed together sweeping synths and thick lattices of noise for a sound that was both epic in scale and intimate, and Replica’s poignant melodic loops and samples from old adverts stirred something even more vital while serving as orienting markers in a whirl of distortion and clatter.

R Plus Seven, Daniel Lopatin’s debut for Warp, is a radical departure from previous form. The plasticity of his compositions is now heightened by a minimalist’s attention to spaciousness, and the tactile surfaces and drones of Replica and Returnal are all but gone, with polished though still identifiably New Age-y timbres in their place. There’s a new emphasis on narrative in tracks such as ‘Problem Areas’: elastic loops and synthetic horns give way to a wafting organ passage; a childlike voice interrupts – “Wait” – and the gleaming tones return, a gentle rebuke to timbral value judgments. Oneohtrix Point Never has always privileged texture, and even though ‘Americans’ is free from surface noise, its Pollock-like surfaces are still daubed and splattered with all manner of synthesised and processed sounds.

‘Still Life’ has two false starts, a fat crescendo of strings and a choir sustaining a high note. Even as it begins properly, it’s no less erratic, with gentle synth lines that herald an arrangement of disembodied vocals, white noise, epic string figures, piano passages and videogame chirrups, ephemera that seem locked in directionless movement through empty space. ‘Zebra’ is a curveball, with stuttering synths dissolving into an ambient stretch from which weightless sax loops emerge, but even on the more conventionally structured ‘Boring Angel’, the elements seem to move outward rather than forward. Lopatin’s compositions have always had a monumental quality that makes them feel three-dimensional, but here his narrative and spatial imagining sometimes makes the album play out like an RPG.

Now that Lopatin has shifted from hypnagogia to hypermodernity, his closest analogues are post-Sushi James Ferraro and Fatima Al Qadiri, particularly the synthetic high drama of her Desert Strike EP. The vocals on R Plus Seven bear this out, miles from the haunting samples on ‘Preyouandi’ or the intimate oral clacking of ‘Nassau’. Instead, Lopatin’s vocal manipulations bring to mind Holly Herndon’s experiments on Movement, and are surprisingly indebted to r’n’b’ and rap (he talks in this month’s Dazed & Confused, in fact, about being “obsessed” with Nicki Minaj while making this record). The stop-start snippets on ‘He She’ and ‘Inside World’ are sensuous but fragmented, like bodies glimpsed through a keyhole, while the different voices that dot ‘Inside World’ imply a cast of unseen and mostly unheard characters. By contrast, the MIDI choirs on the closing track ‘Chrome Country’ provide a moment of poignancy on a record light on them. Strangely for an album so heavily peopled with voices (none of them identifiably Lopatin’s), R Plus Seven feels isolated and eerily post-human. Musically it may be Oneohtrix Point Never’s most accessible work yet, but the emotional pull it exerts is minimal.