“When I’m in that teddy bear suit, I’m like a creepy, sexy baby”: Miley Cyrus on the VMAs and working with Mike WiLL Made It 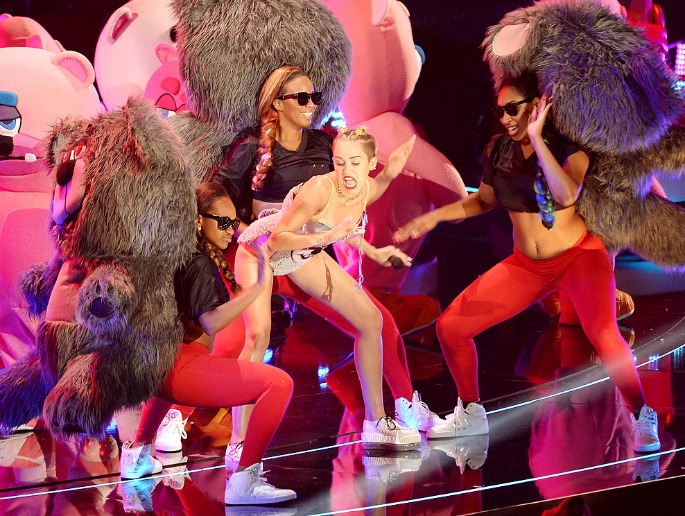 Ever the canny publisher, Rolling Stone made Miley Cyrus the magazine’s cover star this month.

Their interview with the good-girl-gone-bad covered a lot of ground, and now the mag have compiled some of Cyrus’ funniest, weirdest and worst comments that didn’t make it to press.

Perhaps most disturbing is her equation of infantile behaviour with sexiness – but hey, when needs must, reach for the shock tactic. Here she is on those teddy bear costumes from her controversial VMA performance:

“When I’m dressed in that teddy bear thing, I think that’s funny. I was saying yesterday, I had this obsession about this character that’s like an adult baby. Like if you see a baby do something like that it’s so warped and weird, but there’s something creepily hot about it. So when I’m in that teddy bear suit, I’m like a creepy, sexy baby.”

Cyrus also mentioned her working relationship with her producer Mike WiLL Made It and commented on the criticism she’d received over her use of black backing dancers:

“Me and [producer] Mike WiLL were talking about it. He said, ‘For me, my biggest achievement has been working with a white girl—but for a white girl to work and associate with black producers, you’re being ratchet.’ He’s like, ‘Why am I on the come-up if I work with you, but if you work with me, it’s like you’re trying to be hood?’ It’s a double-standard. I didn’t really realize it, but people are still racist. It’s kind of insane.

“Like if I had come out [at the VMAs] with all white-girl dancers, and done the fucking “Cha Cha Slide”— same outfit, same everything — it wouldn’t have been bad. But because of who I came out with, people got upset. Because they were girls from the club. They had thick asses. They were twerking. That’s what I want, though — I want real girls up there who can really party. The Baker girls [her backup dance crew, the L.A. Bakers] don’t give a fuck about me. They love me, but they’re not kissing my ass. They’re just excited to not be dancing at the club.”

She also discussed weed (“the best drug on earth”), Downtown Abbey (“I always thought that shit was too hipster”) and of course, her massive tongue: “I just stick my tongue out because I hate smiling in pictures. It’s so awkward. It looks so cheesy […] I think it’s empowering for girls. Because there’s not one thing that defines what beauty is.”

Kudos for the tongue thing; we’re still not convinced about the creepy sexy babies though. Read more of Cyrus’ couldn’t-give-a-fuck nuggets over at Rolling Stone.