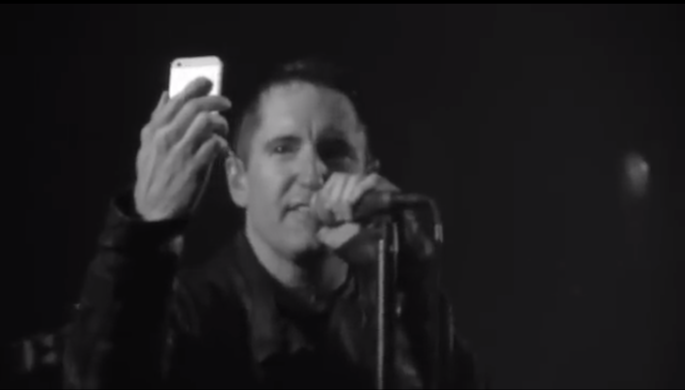 In February 2011, photojournalist Andrew Youssef was diagnosed with Stage IV colon cancer, but has not let his illness prevent him from his passion: he’s shot over 300 concerts since his diagnosis. Earlier this year, he detailed his experience photographing his favorite band, Nine Inch Nails, at San Francisco’s Outside Lands Festival:

I was holding back tears for “Something I Can Never Have”, as I so badly want to have my cancer cured. Even the bleak instrumental “Help Me I Am In Hell” resonated within me. The watershed moment came to me during “Head Like A Hole.” Reznor repeatedly chants “I’d rather die than give you control”. I was immediately overwhelmed with emotion and couldn’t hold back my tears as I’d rather die than give my cancer control.

While he had planned to see Nine Inch Nails’ concert at Las Vegas’ Hard Rock Hotel last weekend, a medical emergency kept him in the hospital. But during the band’s encore, Reznor used his iPhone and sent Youssef a FaceTime request. “I want to have a Bono moment and try to FaceTime [Youseff] for a second,” Reznor told the crowd. “I know some of you saw me on my phone when I walked out for the encore and went, ‘What the fuck is he up to?’”

With the crowd cheering “Andrewm” Reznor and the band launched into ‘In This Twilight’, Youssef’s favorite song. Watch the clip below and head over to CBS to watch an interview with Youssef.