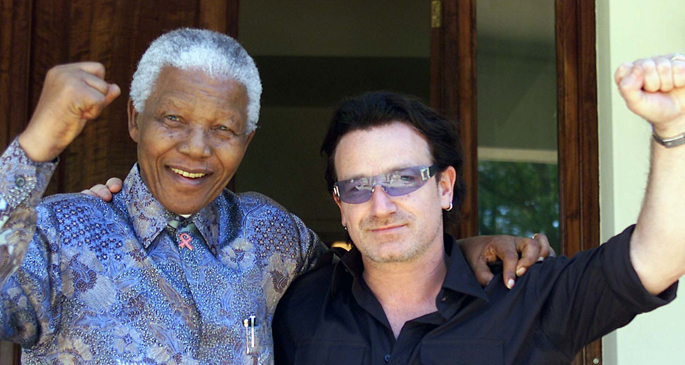 Bono’s charity work over the years has arguably scored him as much notoriety as his musical contributions.

It’s not surprising then that he has offered his thoughts (via Time Magazine) on the great African revolutionary Nelson Mandela, who tragically passed away yesterday. The U2 singer goes into great detail about not only Mandela’s struggle, but his ability to relate to people, making friends out of those who many others would cast aside. He remembers when Mandela told him how he roped famously tight ex-Prime Minister Margret Thatcher into donating £20,000 to the campaign (“I asked”) and how he had bridged the divide with the last President under apartheid F.W de Klerk (“I’m having tea with him next week … He’ll be getting the bill.”).

Elsewhere Bono recounts how much difference Mandela had made in the fight to stop the spread of AIDS and HIV in Africa, and more recently the blight of poverty not only in his own country but across the world (“His role in the movement against extreme poverty was critical.”). It’s a touching memorial to a man who was, and no doubt remains one of our generation’s most crucial activists, and is well worthy of inspection. You can read the piece in full here.