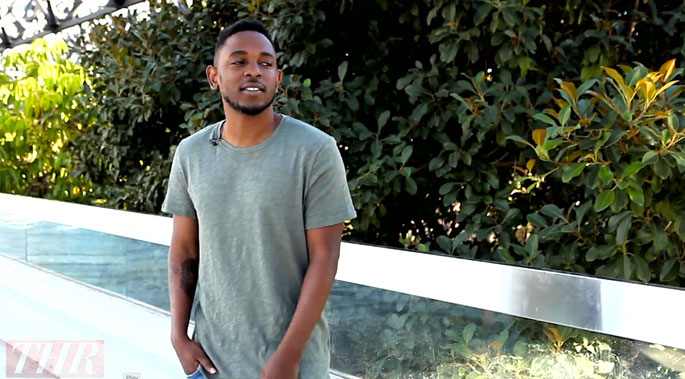 Kendrick opens up to Hollywood Reporter about Grammy nominations, Kanye’s tutelage and more.

Yesterday The Hollywood Reporter published an extensive interview with Kendrick Lamar in which the rapper opened up about various subjects, from his controversial ‘Control’ verse to his predilection for Sonnymoon, Kanye‘s advice and more.

In the video that accompanies the piece, when asked about music he likes Kendrick Lamar namechecked Sonnymoon, whose singer Anna Wise appeared on his good kid, m.A.A.d City album. He also reveals that he found out about his Grammy nominations, seven in total, after the fact due to being on stage at the time of the announcement.

The Grammys will be held this sunday, January 26, in Los Angeles.

Speaking about the controversial ‘Control’ verse from last year, Kendrick revealed that:

It wasn’t premeditated, it just came to me when I was writing that bar. The crazy part is, I didn’t think it would ever go to where dis records were coming at me. I thought people would be like, “He threw some challenges out there, that was dope.’

He also speaks on the advice Kanye gave him during the recent Yeezus tour:

Kanye taught me to never to downplay your ideas. I learned to always stay as creative as possible and never have any boundaries. Those things that people called ‘rants’ onstage are real conversations that we had behind closed doors — about business and how when you get to a certain level people won’t want to see you break through because they only see you as a rapper.