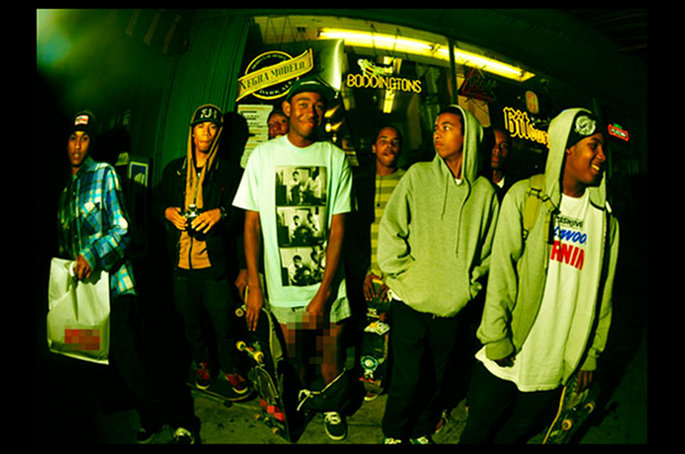 After stepping in to replace Kendrick Lamar on the bill at New Zealand’s Rapture Festival, Tyler, the Creator and rest of the Odd Future collective have been blocked from entering the country at the last minute.

The country’s immigration authority stated that the hip hop collective were considered a “potential threat to public order” after previous gigs in the country had “incited violence”.

In a statement to 3 News, Immigration New Zealand said:

“The Immigration Act 2009 provides that entry permission may not be granted where there is reason to believe there is, or is likely to be, a threat or risk to public order or the public interest.

“Odd Future has been deemed to be a potential threat to public order and the public interest for several reasons, including incidents at past performances in which they have incited violence. In one instance, a police officer was hospitalised following a riot incited by Odd Future.”

In response to the news, OF’s manager Christian Clancy complained that he found out about the decision just an hour before the flight. He tweeted: “sorry new zealand apparently this group of kids that have inspired the shit out of me for the last few years are a threat to society,” adding: “and thanks for the hour before flight heads up. after approving and issuing visas.”

Tyler added: “OF is banned from New Zealand, again. They said we were ‘terrorist threats and bad for the society’ or whatever. Sick. They are anti-Golf.”

It’s not the first time the group have had a dispute with the antipodean isles – back in 2011 they were taken off a festival bill in Auckland when the city council objected to the rappers’ lyrical content.

Odd Future have been touring hard over the past year in support of their various solo efforts, and at last November’s Odd Future Carnival in LA, Tyler was joined on stage by his hero Kanye West to perform ‘New Slaves’ and ‘Late’. [via Pitchfork]