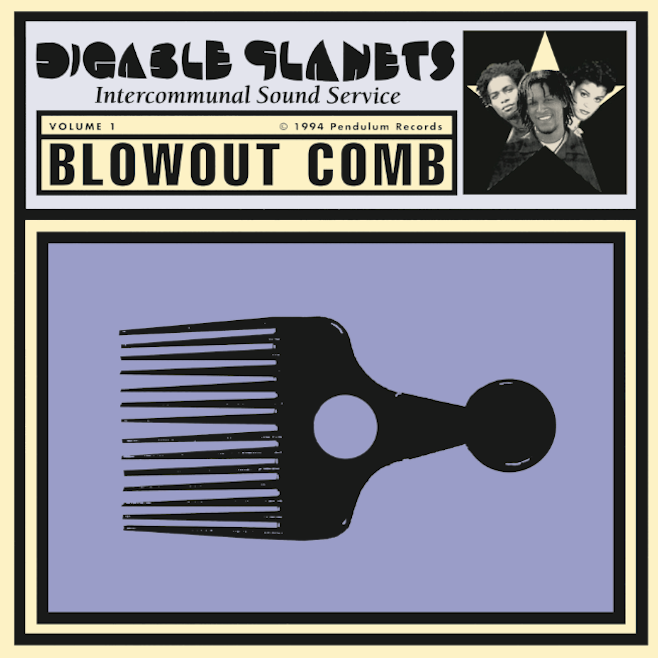 Digable Planets‘ mid-1990s rap landmark Blowout Comb turns 20 this year. To mark the occasion, here’s Matt Welch, co-founder of revered hip-hop reissue specialists Get On Down, on one of the great alternative rap classics.

Like most American teenagers, my first car was a certified hooptie (a 1987 Mercury Topaz to be exact). And, also like most kids I hung out with, that was cool as long as the system bumped. That system did indeed bump, totally custom, from the Infinity 8 X 9”s / side plates to the detachable faced cassette deck (yup).  Many nights were spent driving endlessly around listening to rap tapes way beyond the healthy decibel range.  If I were to have to pick one album that embodies that era of my life, it is Digable Planet’s sophomore release Blowout Comb.

Let’s face it, by 1994 the whole Jazz/Hip-Hop thing had run its course, which would have probably had the smart money betting on DP’s sophomore release being a boring and predictable re-hash of their debut, complete with a single sounding like a pathetic attempt at recapturing the lighting in a bottle the group stuck with their first single, ‘Rebirth of Slick (Cool Like That).’

But nothing could be further from the truth. Their 1994 album was a complete artistic pivot.  It was almost like their record label brass was so happy with the success of Reachin’, they just gave these kids a budget and left them alone to just create. And create they did…

The production on this album is simply brilliant: the weaving in and out of truly original samples … and I mean samples that no one was fucking with in ’94. All layered with hard-as-shit breaks.

‘Black Ego’: I used to listen to this song over and over again. I was so mesmerized by the dreamy loop, which years later I learned was taken from the Grant Green O.S.T. The Final Come Down. Just the way The Meters’ drums drop over that sample still gives me the chills, and the way they let the guitar solo play out at the end. The song was just so unique and musical to me.

‘Dial 7 (Axiom of Creamy Spies)‘: another example of hooking up a sample unlike anything else you had heard before. Their usage of Tavares’ ‘Bad Times’ is simply amazing, creating a ‘70s pro-Black detective show soundtrack.

‘9th Wonder’: Now on to probably the most popular track on the album. This one cleverly combining the classic [JBs] ‘Blow Your Head’ Moog with a way-slowed-down Soul Pride drums that to this day have yet to sound as thunderous.

‘For Corners’: Completing the album is my personal favourite. I always found this track so beautiful, and little did I know, I was listening to a track laced with the unique guitar playing of Shuggie Otis, who would in later years become one of my favorite artists.

The actual album art work was strikingly simple, but once one opened the album you were invited into a whole world of pro-Black propaganda / crime novel.  This style had such an edge to it that it totally reinforced the fact that these cats were taking an artistic stance and not at all trying to satisfy the mainstream.

Complete with what seemed to me at the time mysterious adverts – including one for a boxing match – I truly believe this artwork was the perfect match for this sonically-advanced album. Sadly, many of these details get lost today in the digital era, but luckily the good folks at Light In The Attic have been able to re-issue this classic on double vinyl.