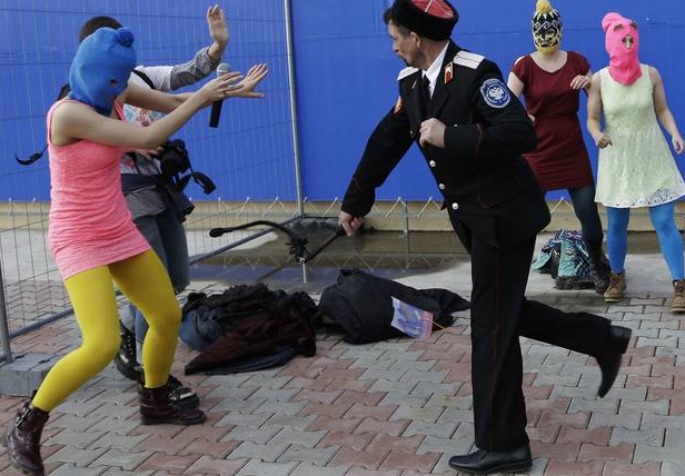 Protestors attacked at the Winter Olympics.

Members of Pussy Riot were hit with horsewhips by Cossack militia this afternoon as they attempted to stage an impromptu performance under the sign for the Sochi Olympics.

Five female members – including Maria Alyokhina and Nadia Tolokonnikova – and one male member were preparing to perform with a guitar and microphone when at least 10 Cossacks and security officials moved in.

As the footage below shows, the Cossacks pulled balaclavas from the protestors’ heads and beat them with whips. One attacked Tolokonnikova with a whip as she lay on the ground, while another appeared to use pepper spray against a protestor. The male member of the group was left with a bloody head and said he had been pushed to the ground.

Police arrived and questioned witnesses, but no one was arrested.

Alyokhina and Tolokonnikova were arrested and quickly released in Sochi yesterday; no official charges were made. Both activists had served most of their two-year sentences for ‘hooliganism’ when they were released in December as part of an amnesty.

A video posted on the Telegraph website captures the action – watch below: