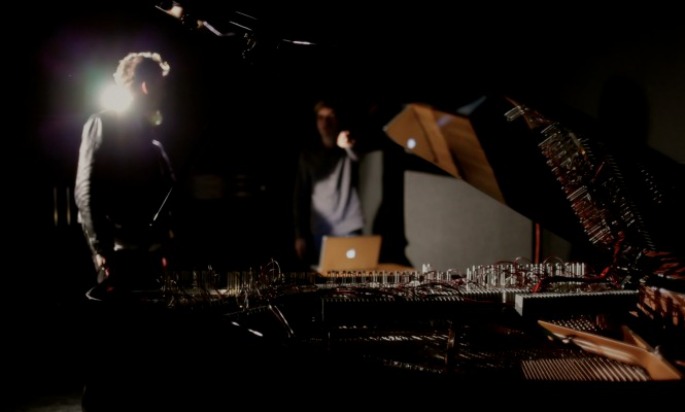 The adventurous British quartet invite the public to explore a rarely heard instrument.

On last year’s Field Of Reeds, These New Puritans built up a soundworld completely unique to them, pitting woodwind, brass and strings against hefty drums and various unusual instruments in complex yet spare arrangements.

Among the weirder sounds heard on the record (see also: a hawk flapping its wings; Britain’s lowest voice) is a new instrument. The magnetic resonator piano, or MRP, is an acoustic piano augmented with electromagnets and motion sensors which resonate, bend and attack the piano’s strings to create infinite sustain, crescendos, harmonics, pitch bends and amazing new timbres.

“It has optical sensors above the keys so it senses your fingers, and if you just touch the keys it sets off the magnets,” frontman Jack Barnett explained to FACT last year. “It has all these unexpected sounds it can create.”

The MRP’s appearance on Field of Reeds was the first time the instrument has been heard on a piece of popular music, and now the instrument will be going on display in London, giving the public the chance to explore its motion-sensor technology and create TNP-esque sounds using triggers, loops and samples. Have a look at the video trailer for the exhibition below.

To celebrate the exhibition, the band have collaborated with The Vinyl Factory to release two exclusive new reworkings of Field Of Reeds, created by frontman Jack Barnett and Bark Psychosis using the original album plus outtakes and unused field recordings.

Due out on April 14, the release is limited to 500 copies and each will be individually signed and numbered by the band. Pre-order it here.

Watch a trailer for the exhibition: