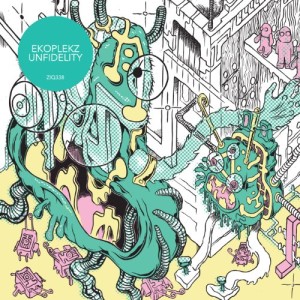 Perhaps the most striking thing about Nick Edwards’ career is the variety of connections he’s forged. Few artists can boast a label portfolio that includes UK dance imprints – Punch Drunk, Perc Trax – alongside experimental labels of wildly different persuasions, from Mordant Music to Editions Mego and Further. That these labels have all found something to claim as their own in his music is a testament to its richness; drawing on the bootstrap studio wizardry of dub and the Radiophonic workshop, the taut sonics of industrial music and more recent developments on the dancefloor, Edwards has found a sound that chimes with many.

That said, like almost any producer with such a high workrate, not all of it’s good. A combination of endless murk and a loose, “let’s try this” approach to structuring means that more than a few Ekoplekz releases sound pretty much the same. It’s the occasional glimmers of light that stick out – the elegant dub stylings of Fountain Square on Mordant, say, or the surprisingly lyrical Dromilly Vale on Public Information. Perhaps it was these moments that caught the ear of Mike Paradinas. The press release for Edwards’ debut release for Planet Mu emphasises that Paradinas worked alongside the producer to “pick the fruits of his labour”, selecting tracks that aligned with the label’s “melodic sensibilities”. And while Unfidelity is by no means a radical departure – palpitating rhythms and scarred synth textures are a dependable presence – it displays a clarity and melodic directness that’s unusual for Ekoplekz.

The title track is a prime example: in place of the usual usual brow-furrowing gloom we’re given airy, meditative spaces; it’s possibly one of the prettiest pieces of music Edwards has put his name to. Elsewhere, ‘Sea 90’’s agitated percussion is softened by its sweeping, melancholic synth lines, and ‘Severn Beach’ gives off a whiff of Kraftwerkian techno-optimism. Even darker moments often have a new sense of structural precision to them. Opener ‘Trace Elements’ is a standardly moody Radiophonic bleepscape, but it congeals around its four-note melody with real deliberateness (there’s even a breakdown of sorts). ‘Analogue Twitch’, meanwhile, is about as close to straight-up techno as Edwards has dared (or perhaps deigned) to go.

Most surprising, however, are the closing two tracks. The weepily romantic ‘Tuning Out’ could almost be a lost Darkstar instrumental; ‘Sleng Zen’’s title seems to evoke meditative dub, but it displays a kind of luxe melancholy closer to trip-hop (trip-hop, that is, as realised in the studio of Raymond Scott). Granted, in places old habits die hard – plenty of these tracks could stand to lose a couple of noodly minutes, and ‘Pressure Level’’s haunted house digi-dub is irritatingly goofy. But by the time these tracks come around it feels like we’ve covered a lot of ground, much of it fresh and intriguing. This might be a testament to Paradinas’ selection as much as anything. But regardless of the cause, in Edwards’ often knotty oeuvre, Unfidelity stands out as a keeper.