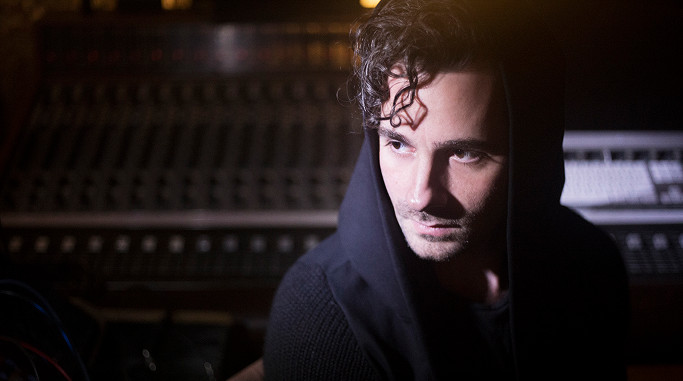 Josh Eustis is best known for his work in Telefon Tel Aviv, a project that was tragically halted in 2009 when Charlie Cooper, the other half of the group, died.

In a press release for Move to Pain, Eustis – who also spent time as part of Nine Inch Nails’ live band – explains that he “sat on the music for years, against the advice of friends and family, and the record became the elephant in the room. The subject matter of the record is by far the most personal of my musical career.”

“I think now, looking back”, Eustis continues, “that this was the reason for my reluctance to release it. With grief like this, though, if it’s sitting on a hard drive in the same room, I can’t stop thinking about it until it’s gone; then and only then does the sweet relief of forgetfulness visit me, ﬁnally.”

FACT spoke to Eustis to find more about Move to Pain. It will be released on June 24.

You say that the album’s the most personal of your career – which is unsurprising, given the events that feed into it. Can you ever imagine another release being as cathartic as you say this one is?

In the present, no. I can’t imagine having to go through that kind of bullshit again. I hit a low that was unimaginable. Of course, I can’t see the future and who knows what it holds; life is tremendously sad a lot of the time and there will be more records that are personal and certainly cathartic. But as things are right now, I don’t want to have to purge like this again.

You talk about this album becoming an elephant in the room – did you always knew that this music deserved to be released, but were simply reluctant to do so? Or did you have a completely fucked perspective on its quality?

I kind of always think that everything I make is atrocious and that no one will care. I thought this record was kind of stupid. Usually I had Charlie to tell me ‘no, man, we’re on the right track, stay the course.’ My friends were telling me that I had ‘record dysmorphia’ and that it was good, and that I needed to release it. I just wasn’t confident in it. In the end, I just couldn’t keep it around any longer.

How did losing Charlie affect how you viewed your career in music? Not just in the obvious sense that you lost the person you were making it with, but it must have made you rethink everything, right?

I totally thought I was done. I was doing anything to make time go by. Working on music became a chore and a burden and I couldn’t focus or make anything that I thought was worthwhile. I was going to sell everything off and go back to school and study technical Japanese or something, anything else, but then I realised that I’m too old to do anything else and that sometimes it is, in fact, too late to start over.

How the hell was I going to learn how to make a record alone? Or if not, how could I replace Charlie? Both options seemed impossible and truly pointless for a long time.

In terms of how the record sounds… you talk about loss, decay and the tremendous emptiness of the physical world as its ‘themes’. Would the music sound that crushed and dark to somebody who didn’t know the context?

I doubt it. I think it would mostly just sound really shitty to someone who didn’t really know the context. Things on this record were intentionally done ‘wrong’ in a way that will make producer and engineer types cringe, but fuck it: it’s the sound I was going for. I did my best to use not just the songwriting, but the production as well, to convey a mood or a collection of feelings, sentiments. The whole thing should sort of have the haze of listening to something through a wall, or looking at something through a dusty windowpane, or more specifically trying to recall a memory that at one time seemed sharp and present but that has dulled with age.

What is the title a reference to?

It’s a reference to the fact that even if one is engaging in daily actions to make life simple and keep perspective on blessings, everything can move around you in such a way as to subvert that entire lifestyle, methodology, or line of thought.

Would you describe this as a tribute record to the people you’ve lost? Or is it more complicated than that?

It’s more complicated than that. I wouldn’t really say tribute as much as I’d say inner monologue or even soliloquy. I’m addressing other people in my life that factor in somehow, or were affected by the same things: my mother, ex-girlfriends, some others. A lot of it is just me venting or relating a dream. ‘Crows’ is about a dream I had right after my father was diagnosed in which my entire family, myself included, was burned alive in a thatched hut up in the Himalayas – hey I dunno, whatever – and I was being burned alive but could see the whole thing happening from outside. So in that way some of this record is just pure storytelling, I guess.