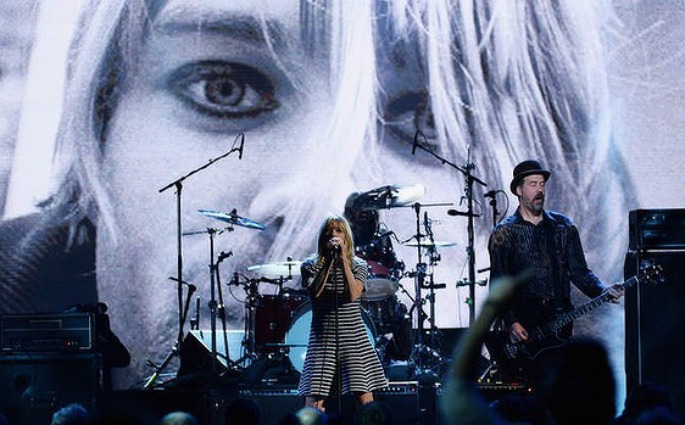 The remaining members of Nirvana surprised the audience at their Rock & Roll Hall of Fame induction last night by performing a set with four different vocalists.

A low-key, accordion-assisted ‘All Apologies’ featured Kiwi newcomer Lorde, while Joan Jett added her gnarled vocals to ‘Smells Like Teen Spirit’. Pop innovator St Vincent fronted ‘Lithium’ while the highlight, judging from the brief video clips that have surfaced so far, was Kim Gordon’s wild-eyed gallop through ‘Aneurysm’.

Scroll down for clips of each of the performances, filmed by audience members and Stereogum.

Nirvana were inducted by REM’s Michael Stipe, who described the band as “singular and loud and melodic and deeply original”:

“Nirvana tapped into a voice that was yearning to be heard. Nirvana were kicking against the mainstream. They spoke truth and a lot of people listened… They were singular and loud and melodic and deeply original. And that voice. That voice. Kurt, we miss you. I miss you. This is not just pop music. This is something much greater than that.”

Grohl and Novoselic both gave speeches, as did Kurt Cobain’s mother Wendy. Courtney Love also made an appearance to give her husband’s bandmates a hug they probably didn’t ask for her, afterwards tweeting that it was “the most magical part of the evening”.

Also inducted last night were Peter Gabriel, who performed ‘Digging In The Dirt’, ‘Washing Of The Water’ with Chris Martin and ‘In Your Eyes’ with Youssou N’Dour, and panto-rock villains KISS, who didn’t perform.

Lorde on ‘All Apologies’: