I Shall Die Here 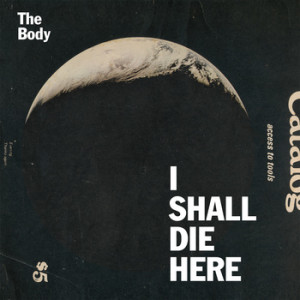 Founded in 1999 in Providence, Rhode Island, The Body have carved out a niche at the artier, ultra-extreme end of contemporary metal, their blend of churning sludge instrumentation and hysterically shrieked vocals comparable to Stephen O’Malley’s early ‘00s group Khanate. The Body, however, have appeared set on pushing boundaries: their highly recommended 2011 album All The Waters Of The Earth Turn To Blood employed the 24-voice Assembly Of Light choir, and drew influence from doomsday prophets such as Charles Manson, Jim Jones, and Shoko Asahara of the Japanese cult Aum Shinrikyo. The aim, vocalist/guitarist Chip King told me around the album’s release, was to “contrast beauty and ugliness… to present a vision of a flawed world. A beautiful world. An ugly world.”

This is a sensibility that’s seeped out of noise and metal culture and into clubland over the last years, with Blackest Ever Black, Downwards and Hospital Productions conspiring on a darkness that smudges at the edges of genre. So perhaps it was inevitable that we’d see meetings like this one: an album bringing together The Body with UK-based producer Bobby Krlic, aka The Haxan Cloak. Certainly, this is a pairing guided by some logic. The Body are no strangers to collaboration, having recently made albums with orchestral drone group Braveyoung and Louisiana sludge rockers Thou. And while signed to Tri Angle, Krlic is no foreigner to such territory; he grew up on Slayer, Anthrax and Napalm Death, and let’s not forget the first Haxan Cloak album saw the light on left-leaning London metal imprint Aurora Borealis. Still, this collaboration is guided by an unusual modus operandi. The groups were matchmade by Matt Werth of the Brooklyn label RVNG, who invited The Haxan Cloak’s Bobby Krlic out to New York for a week, then locked him in a studio with some pre-recorded Body tracks for a week of intensive remixing.

Actually, remixing feels sort of the wrong word, implying as it does a track being retooled with some kind of dancefloor intent. What Krlic does is often more like re-editing, The Body’s screeching vocals and lumbering riffs remaining largely intact, but with sections looped so they trudge out towards the horizon, pockmarked with yawning chasms of bass synth, or subjected to a horrific torture chamber of effects. On the opening ‘To Carry The Seeds Of Death Within Me’, the guitar and drums move forward as a sludgy churn, but Krlic slowly marches the track offshore into a shimmering pool of dark ambient, loops submerged but resurfacing, Kraken-like, for a terrifying finale. On ‘Alone All The Way’, a voice calmly discusses thoughts of suicide as Lee Buford’s beats are dosed with echo, rippling and multiplying. Krlic, a student of sound design, approaches the material with the dynamic, spatial sensibility he showed off on his 2013 album Excavation, unafraid to flirt with monotony or suddenly pull away the rug. By occasionally presenting King’s vocals with little adornment – see, as it flails away above little more that a quiet sonar-like pulse on ‘Hail To Thee, Everlasting Pain’ – he occasionally intensifies the spirit of devastation and futility already there in The Body’s music.

I Shall Die Here is a bracing listen, certainly no easier than The Body’s conventional albums, and in its application of intense studio treatment, at times perhaps even more intense. But it is also a whole lot better than The Body’s 2013 album for Thrill Jockey, Christ, Redeemers, which focused too closely on their dense and obliterating qualities at the exclusion of space and dynamics. Here’s a record, then, that pulls off a clever sort of flourish: both communicating a horrific plunge into darkness, while showing all its participants in the best possible light.