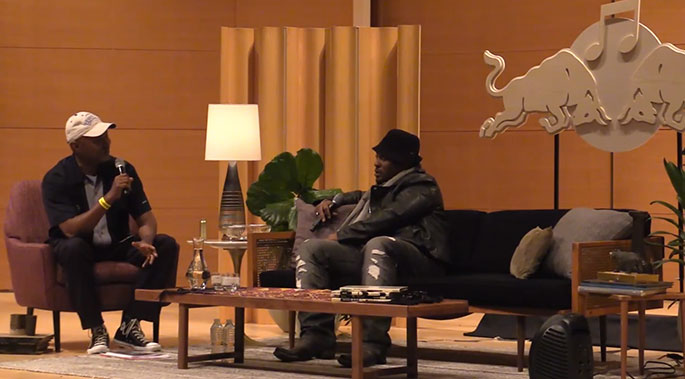 D’Angelo, the singer, songwriter and multi-instrumentalist best known for popularising the short-lived neo-soul movement in the late 90s and early 00s, sat down for a rare public conversation about his career for Red Bull Music Academy’s 2014 Festival New York. The entire conversation is now available to watch on YouTube.

In Conversation With D’Angelo took place earlier this week in Brooklyn as part of RBMA’s now yearly festival, a monthly series of events throughout the city inspired by the success of the 2013 installment of the roving Red Bull Music Academy in New York City.

Hosted by journalist and critic Nelson George, the 90-minute conversation covers a variety of topics about D’Angelo’s creative process and career including his first experience at the Apollo, playing the guitar, his IDU group and much more.

Fans of D’Angelo and neo-soul may also want to check the 2013 In Conversation with Erikah Badu, which took place during the RBMA New York city edition and follows the same format delving into the singer’s career and creative process.

The RBMA Festival New York continues for the next week with Hudson Mohawke’s first live show, a Lit City rave and the concluding night featuring a host of previous Academy alumni performing in the Lower East Side. Head to the site for more details and tickets.