Skrillex performs with Lauryn Hill, Janelle Monáe, The Doors’ Robby Krieger, everyone else ever at Bonnaroo 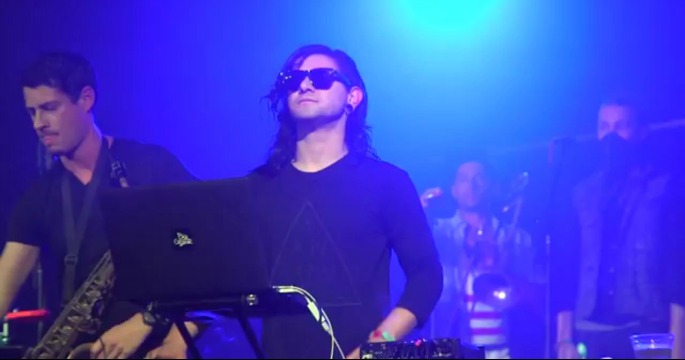 Having performed at Tennessee’s Bonnaroo festival on Friday, the EDM overlord helmed one of the event’s feted “Superjams” on Saturday – longform wigouts, typically featuring a raft of unlikely specially guests (Animal Collective and Police Academy’s Sgt. Jones, anyone?) Skrillex’s set, however, was starrier and stranger than most.

According to Billboard, Skrillex was joined by the elusive Lauryn Hill, who closed the set with versions of ‘Lost Ones’, The Fugees’ ‘Ready Or Not’ and a cover of Bob Marley’s ‘Jamming’. He was also assisted by pop-soul livewire Janelle Monáe, who rattled through covers of Michael Jackson’s ‘Wanna Be Startin’ Something’ and James Brown’s ‘I Feel Good’. The Doors’ Robby Krieger performed ‘Break on Through (To the Other Side)’, assisted by Cage The Elephant’s Mat Shultz and Skrillex on guitar and platitudes (“I wouldn’t even call this a live band. It’s like… some alien race of music.”)

The rotating cast of guests goes on. Warpaint rocked up to cover Technotronic (‘Pump Up The Jam’) and David Bowie (‘Let’s Dance’), A$AP Ferg had a crack at Biggie’s ‘Juicy’, and Mystikal barrelled through ‘Shake Ya Ass’ and ‘Bouncin’ Back (Bumpin’ Me Against The Wall)’, amongst others. Thundercat, Zedd, Big Gigantic, Fatman Scoop and Damian Marley also featured.

A short clip of Marley and Scoop’s performance is below. No emissaries from the Midlands, unfortunately.