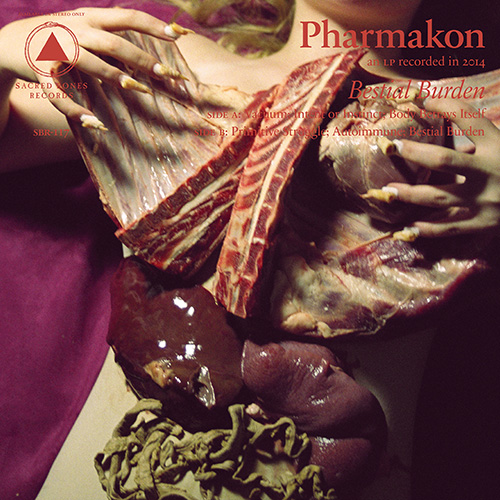 Another fleshy slab of industrial commotion from the New York artist.

Noise aggressor Margaret Chardiet has announced her second LP as Pharmakon, due out on Sacred Bones this autumn. Titled Bestial Burden, the album is said to be directly inspired by Chardiet’s gruelling experience of having an organ removed, and the accompanying suspicion that her physical body was out of her control.

“After seeing internal photographs taken during the surgery, I became hyperaware of the complex network of systems just beneath the skin, any of which were liable to fail or falter at any time,” says Chardiet, which would explain the butchered organs pictured on the album’s cover.

“I felt a widening divide between my physical and mental self. It was as though my body had betrayed me, acting as a separate entity from my consciousness. I thought of my corporeal body anthropomorphically, with a will or intent of its own, outside of my will’s control, and seeking to sabotage.”

Bedridden for several weeks, Chardiet started exploring the idea of “the conscious mind as a stranger inside an autonomous vessel” in lyrics and music that would become Bestial Burden. The album was recorded at Heaven Street Records in Brooklyn with Sean Ragon (who was behind her 2013 debut Abandon) with some of the vocals performed live in front of a small studio audience.

Check out the brief album trailer below (which mostly consists of heavy breathing, underscoring the corporeality theme) and look out for Bestial Burden on October 13 via Sacred Bones, which coincides with her support slot on Swans’ European tour.