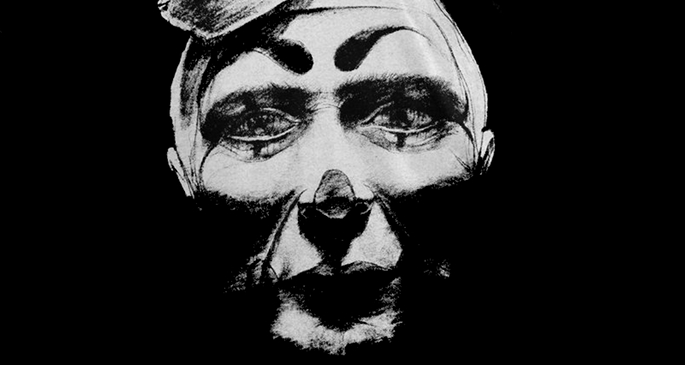 Earlier this week, Mike Patton, of Faith No More and countless others, announced that Mr. Bungle – one of the aforementioned others – would be running an official reissue series in 2015 (the reissues released this year are not band-approeved).

Cue celebrations: real Patton heads know that Bungle is his greatest band, and it also means the re-release of one of FACT’s 100 Best Albums of the 1990s. To mark the occasion, we asked metalhead-to-hand Robin Jahdi to talk through Bungle’s bizarre career – the fights, the fueds, the fact they somehow ended up on Warner – and why their music still resonates today.

Ah, Faith No More: the band whose songs you either know all of, or just one, and that’s a cover of the Commodores’ ‘Easy’.

But you know they’re good, because they’re one of those influential, interesting cult bands that somehow sold millions in the early 1990s, when glam metal died a death, major labels needed something to cling on to, and massive albums shifted in a year what Adele’s back catalogue has done in total. They’re now one of those festival reformation bands from the past, like Pixies and Soundgarden, though they were once a band whose ideas and influence put most other bands to shame. But as interesting and influential a cult band as Faith No More was, that was nothing compared to singer Mike Patton’s high school band, Mr Bungle, to whom FNM were a pop sellout in comparison.

Formed in Eureka, California, in 1986, Mr Bungle released a bunch of demos that started out as thrash/death metal, but gradually incorporated other influences like ska and funk. When singer Chuck Mosley (himself a replacement for Courtney Love) acrimoniously parted ways with FNM, their guitarist (and Bill & Ted’s Bogus Journey ‘musical legend’ cameo) Jim Martin approached Patton after hearing the band’s demos. As for how exactly Bungle later found themselves on Warner Bros – well, Wikipedia says it’s because they were building a fan base in Northern California. Allmusic says it was due to the success of FNM, who by early 1990 were MTV stars, Patton a poster boy to rival Anthony Kiedis (more on him later) thanks to hits like ‘From Out of Nowhere’ and ‘Epic’. I’d be tempted to go for the latter; if FNM are doing big things, why not sign the other band he sings for?

So in 1991 – that heady vintage of Nevermind, the Black Album, Spiderland, Loveless, Necroticism, Laughing Stock, etc – Warner released the first official, eponymous Mr Bungle album. Treated by the media as ska-metal, largely due to the presence of some brass in a rock band, this was the sound of a bunch of insanely talented young men with a lot of ideas and no real strategy of what to do with them. At points a gleefully juvenile, primary colour version of (album producer) John Zorn’s patchwork-jazz-noise Naked City, all too often the band veered into the silly territory inhabited by Frank Zappa or their contemporaries They Might Be Giants. So for every smooth jazz-into-ska transition in a single line of music, or massive riffs over an organ that sounds like it should be in a third Ghostbusters, they would neutralise that goodwill with the sound of someone pooping, or the same phrase repeated over and over again in different – and increasingly goofy – voices. But Patton’s charisma was shining through, there were some good hooks, and it was a fun mess overall: funk, cartoon and circus music colliding with easy listening and hard rock. It was perfect in that era of Jane’s Addiction, Green Jello, RATM and early Tool, when Californian rock was a bizarre melange of influences, ideas and silliness. 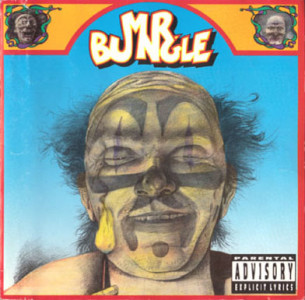 Four years later, after Faith No More had matured somewhat with the release of Angel Dust, with its hits ‘Easy’, ‘Midlife Crisis’, ‘Everything’s Ruined’ and an appearance on The Word, where they ‘forgot’ how to play the song they were meant to, Bungle released their second album, Disco Volante. Produced by Billy Anderson, who around that time was working on classics by Neurosis, Eyehategod and Kiss It Goodbye, the album had an almost murky quality. The circus atmosphere of the debut was replaced with far darker comedy (a song called ‘Violenza Domestica’?) and the musical twists and turns had become far more frequent and spasmodic, taking the listener into nastier places. It was amazing. Anderson’s somewhat sludgy mix belied the razor sharp playing and attitude, which clearly influenced the late ’90s noisecore movement, including Dillinger Escape Plan, Botch, Candiria and Converge.

Opening track ‘Everyone I Went to High School With Is Dead’ begins slowly and jerkily, the most uninviting major label album intro since The Melvins’ ‘Hooch’ two years earlier (also mixed by Billy Anderson). It’s only really on track three, the nine-minute ‘Carry Stress In The Jaw’, that the album really finds its rhythm. And another one, a few seconds later. And then another. Everything, from the playing to the singing, to the ideas (of which there are approximately as many in this song as on the entire debut album) is carried off with utter self assurance and aplomb. They don’t just have death metal sections thrown in: they are brilliant, Carcass- and early Obituary-level death metal sections. There’s thrash riffing over free jazz, Munsters-esque bits, surf guitar, an old man(!). And then you get ‘Desert Search for Techno Allah’, with its mantras, electro, house, John Carpenter synths and tablas, all with a vaguely Middle Eastern tone.

“If Disco Volante was a Lynchian nightmare, California is the soundtrack to a John Waters film that only exists in the mind of Patton.”

There’s an hour of this: shocks, jokes, riffs, jazz, Italian spoken word, more death metal, Weezer-esque mumblecore, Aphexian kid-voice-discomfort. It shouldn’t work, but it really does. The band members had been maturing artistically, Patton not only with Faith No More, but also through working with John Zorn. Trey Spruance (guitar) Trevor Dunn (bass) and Danny Heifetz (drums) formed the similarly eclectic Secret Chiefs 3 around this time, and they all really gelled as a whole, having got their exuberance at being signed out of the way, and just focusing – it would seem – on making something as technically brilliant, yet cohesive, as possible.

In the intervening four years, Faith No More had matured to the extent that they became extinct. Red Hot Chili Peppers, whose singer had still not forgiven Patton for being a similarly pretty, long-haired singer who happened to be prettier and sing better, managed to become totally irrelevant, and then more popular than ever, thanks to musical vulture/magpie/compressor extraordinaire Rick Rubin. And it is that very popularity which adversely affected our Bungle heroes in 1999.

This was the summer RHCP released Californication, a decent record with some lovely songs like ‘Scar Tissue’ and ‘Otherside’ (come on, the backing vocals at the end of that are gorgeous). Mr Bungle, that same summer, released… California. It was due to be on the same day, but we wouldn’t want to confuse people, now. Not only was the third Bungle album delayed, but every festival appearance they’d been booked for at which the Chilis were also playing got cancelled at the behest of erstwhile bridge-lurker Kiedis. Which, that summer, was pretty much all of them. 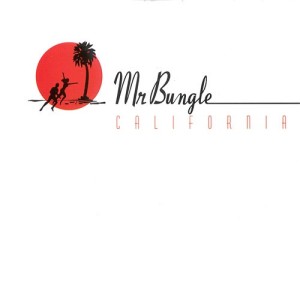 The album itself? Pretty sure this one was in FACT’s 100 Best Albums of the 1990s, and with good reason. Patton called this their pop album; even though it would still alienate you if you played its songs at a party, it did have way more traditional structures and singing styles than Disco Volante. That is not to say it was in any way a ‘normal’ rock album, it just wasn’t going out of its way to befuddle the listener.

If the 1995 record was a Lynchian nightmare on the level of Eraserhead or Inland Empire, California is the soundtrack to a John Waters film that only exists in the mind of Patton. It’s an immaculately arranged, high-camp, melodramatic pop gem rooted in lounge, surf, doo-wop, swing and rockabilly. You can virtually feel the polyester of the Hawaiian shirts. Odd comparison though it may be, this cocktail of 1950s and 60s genres, spliced with modern day western and classical eastern motifs, is a way more fitting tribute to old pop forms than Billy Joel’s An Innocent Man, itself an intentional homage to the music of his youth. The way the styles are treated and contextualised on California, despite the humour is if anything a more honest and respectful gesture. Not to mention that Patton, by this point, was by some way the finest vocalist in rock.

The ghost of old Bungle lives in the erratic ‘None Of Them Knew They Were Robots’ and brilliantly fractured closer ‘Goodbye Sober Day’, but the likes of ‘Sweet Charity’ and ‘Retrovertigo’ are ballads played straight to the point of exaggeration. ‘Pink Cigarette’ even ends with an “it’s just five hours left until you find me dead” countdown, eventually backed by a life support machine with bad news. ‘Vanity Fair’ is doo-wop of such exuberance and hysterical enthusiasm, it’s as if Hall and Oates have taken too much angel dust and proceeded to feed their faces to their dogs in a daze of elation: “I can cut you and remove the sheath of your ignorance!”

California is a 1999 product that is still so fresh that it could have been made yesterday (try saying that about Fight Club or Slipknot…) and could even be digested – gradually – by fans of that distaff Chris Isaak, retro Hollywood chanteuse, dark side of glamour and sleb stardom, Lana del Rey herself. Or it will soundtrack her eventual biopic. Sadly, Bungle themselves are no more, gradually fizzling out officially at some point in 2004, though Secret Chiefs 3 still make music, and Patton is now a soundtrack composer, having scored The Place Beyond the Pines, among other things. And his Mondo Cane and Director’s Cut (the latter with Fantômas) records are fitting companions to this triptych. The band reuniting is unlikely, given they hate each other. But the same was said of Faith No More and Pixies, and there are those Bungle vinyl reissues due…