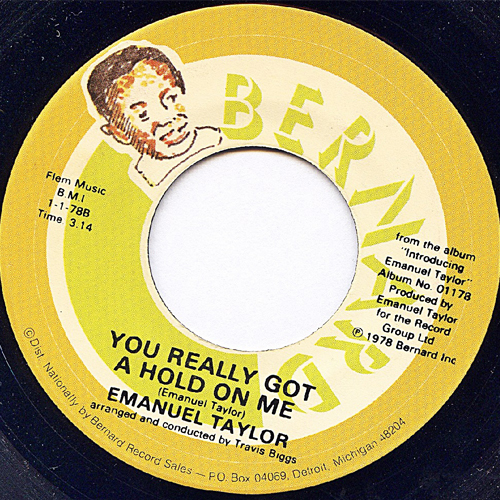 EMANUEL TAYLOR
‘You Really Got A Hold On Me’
(Bernard Records, 1978) 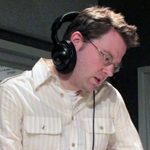 It was pretty challenging to pick just one “forgotten classic” to feature here since I run a label that specializes in releasing rare music that has yet to be reissued. My goal for the label is to put out music just like this – albums and singles that have been left in obscurity but are worthy of a second look and will hopefully reach a whole new legion of fans.

I don’t have a great story about how I discovered Emanuel Taylor’s ‘You Really Got a Hold On Me’. Long story short, I first heard the track while researching potential soul 45s for my label. So many great rare soul 45s are reissued before I have a chance to sink my teeth into them, so it was a shock to me that this one wasn’t.

The title to this track is a bit misleading, as it isn’t a cover of Smokey Robinson and the Miracles’ ‘You Really Got A Hold On Me’, but this 45 has it all. Vocals and harmonies reminiscent of Stevie Wonder penetrate a drum beat similar to that of ‘Signed, Sealed, Delivered, I’m Yours’. The horn and string sections parallel a classic ’60s Motown sound. This track is so perfectly crafted – from its tight snare and hi-hat groove to its soaring horn and string parts, emotional vocals, and lyrics about one man’s affections for his lover – that it really should be in the Motown cannon.

The B-side, ‘Society’ is a killer ’70s funk number thanks to its falsetto vocals and anti-war lyrics. It was released in 1978 on Bernard Records, a small, now-defunct Detroit-based label. Emanuel recorded another single and additional material for an album but it never materialized. ‘You Really Got a Hold On Me’ received some airplay on the radio station WCHB in Detroit by DJ Tiger Dan but never made it out of the region, likely because the music industry had moved on from the sounds of the ’60s to the emerging beat of disco.

To this day Emanuel still sings and records gospel music but this single remains hugely underrated, even on the northern soul scene. When I did get in touch with him to license the 45 we chatted about the music of Detroit in the ’70s, all the great clubs he performed in back then including Twenty Grand, Orchestra Hall, and Latin Quarters, and of course about the single. I get the sense that Emanuel feels this track should have been a huge hit.