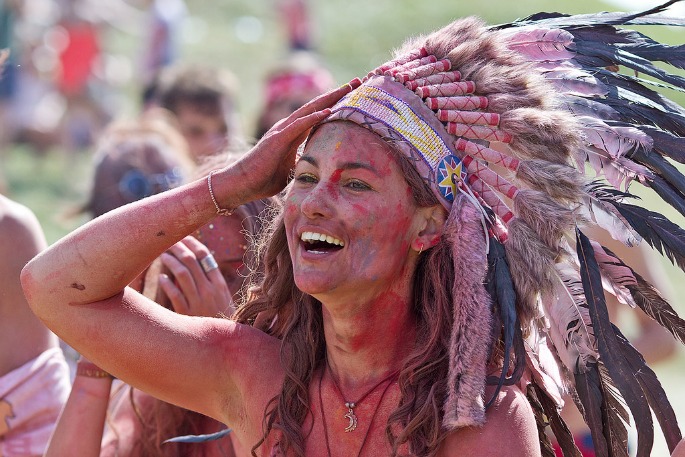 Somerset festival follows in footsteps of US events by nixing feathered headgear.

Glastonbury has banned the sale of Native American-style headdresses after an online petition attracted just 65 signatures. Campaign leader Daniel Round posted an update to on Tuesday stating that festival organisers had been in touch to tell him they were adding the headgear to the list of Glastonbury’s prohibited vendor items alongside other verboten tat like candle flares and flags.

“Our petition, small in numbers but passionate in support, pushed this issue right up to Emily Eavis, and she listened,” wrote Round. “Although it is only one UK festival, I hope that if we spread the news of Glastonbury’s decision online, positive discussions about the stereotyping of Native Americans and the headdress will grow in the UK and elsewhere.”

Round’s petition also called on organisers to make “an official statement about the issue”, broaching a conversation that could “foster understanding and facilitate positive shifts in attitudes”, but no one from the festival has spoken publicly about the decision.

Earlier this year Bass Coast, a festival in British Columbia, Canada, also banned feathered headdressses from its event. “We understand why people are attracted to war bonnets,” organisers explained. “They have a magnificent aesthetic. But their spiritual, cultural and aesthetic significance cannot be separated.”

The campaign follows a summer of public debate about the appropriation of headdresses by festivalgoers and celebrities alike, with the likes of Pharrell, Lana Del Rey and Wayne Coyne coming under fire for wearing headdresses in photo shoots.

Tickets for next year’s Glastonbury sold out in under half an hour earlier this month. Fleetwood Mac – recently reunited with Christine McVie – are the bookies’ favourites to headline. [via Guardian]